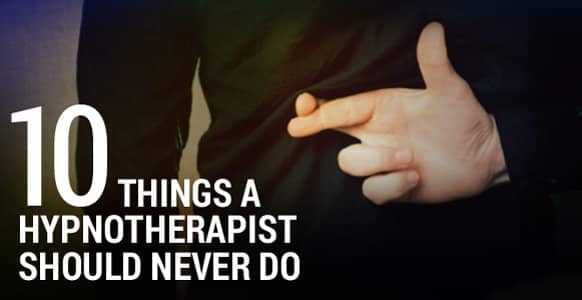 Call yourself a professional? Good.

But if you do, then you have to behave like one!

That means a bunch of different things you should do, and another bunch you shouldn’t.

A professional by definition is someone who is a member of a profession.

Someone who’s been trained to meet specific standards. Someone who has the knowledge and skills to deliver the goods, in whatever field that might be. And where hypnotherapy is concerned, it’s the same deal.

But how do you know if what you’re doing is sticking to the professional code, or if you’re getting certain things wrong?

If you’ve been a hypnotherapist for a long time, then you’re probably already aware of most of the potential pitfalls.

If you’re new to the job, however, here’s a reminder of the top 10 things you should avoid like the plague.

1.Hypnotize Someone Without Their Consent During A Professional Hypnotherapy Session

Hypnosis is a form of two-way communication between you and your client – and is anything but a causal relationship that should be entered lightly!

Unless someone really wants to be hypnotized, and they ask to be, there’s very little point during a hypnotherapy session.

Aside from a multitude of reasons why you should never break this deadly sin as a professional – you also run the risk of getting a bad reputation for trying to pull a fast one.

NOTE: Out of a professional context, such as during an everyday conversation with someone where you use ethical conversational hypnosis, the rules around consent are different. Which is why you must always use hypnosis ethically. Which takes us to the next point…

2. Use Hypnosis Unethically, Or To Your Advantage

The purpose of hypnosis is to be a force for good and help people deal with problem areas in their lives.

To give them the means to cope with difficulties, or to enable them to eliminate those difficulties completely.

It’s not designed to be used for personal gain or to take advantage of another human being.

So, for instance, you should never use hypnosis to profit from a business deal. Likewise, it isn’t meant to be a shortcut to seducing someone.

And let’s face it, it’d be a pretty sad state of affairs if you had to resort to tactics like that to get another person interested in you.

3. Offer Pain Relief Without Knowledge Of The Facts

This sounds counterintuitive, but it isn’t.

When someone is in pain, that pain is often a signal pointing to a bigger issue.

It’s the body’s way of warning you that something’s wrong. So to simply take the pain away, without being aware of the full picture, could have devastating consequences.

Instead, make sure you get crystal clear instructions from your client’s doctor. If pain relief is advised, then feel free to provide it. If not, or if you’re uncertain in any way, then just don’t do it.

Contact the doctor’s office and ask for written confirmation. That way, you’ll know for sure that you’re doing what’s in the best interests of your client. And you won’t get into hot water further down the road.

4. Set Up A Professional Practice Without Formal Training

In this case, “professional” means charging clients for your efforts. If you don’t have any formal training, any certificates, or any diplomas, then you’re not really a professional.

You might be an amazing hypnotherapist, but without the credentials to back you up, how can you prove it?

Naturally, anyone who promotes themselves as a professional should be able to say “Look, I graduated from the Such-and-Such Hypnosis Academy.”

Your clients should be able to see the proof of your qualifications hanging on your wall. You wouldn’t let a doctor or a dentist do any work on you unless they’d been rigorously trained, would you?

Same should go for you and your hypnotherapy.

Of course, the laws governing whether or not you’re entitled to practice vary from country to country, and even from state to state in the US. Regardless of that, hypnosis is a powerful tool that can prove life-altering in the right hands.

At the end of the day, the onus is on you to get the training and certification you need to meet all local and national criteria. And that applies even if your country or region doesn’t specify what their requirements are. Look at it this way: the more qualifications you have, the better hypnotherapist you’ll be.

The more success you’ll have, and ultimately the more clients you’ll attract. If there was ever a way to guarantee failure as a hypnotherapist, this is it.

Your clients come to you with all sorts of issues. In some cases it may have taken them months or even years to work up the courage.

The last thing they expect is for you to share their private and personal details with anyone else.

Laws regarding client confidentiality may vary from place to place, but that’s not really the point. It’s more a question of respect.

If you don’t treat your clients with respect, and that includes the things they say and do during sessions, then it won’t be long before you don’t have any clients left.

Suppose you went to your doctor with an embarrassing problem. It happens, right? What would you do if you suddenly heard people talking about it outside the doctor’s office?

Or maybe laughing about it?

You’d be furious, that’s for sure.

You’d probably give the doctor a piece of your mind. You might even take matters further, writing a letter to his superiors. Or firing off a petulant tweet.

And no-one would blame you.

Because that kind of behavior is unprofessional in the extreme – and likely to lead to all kinds of unpleasantness, complications, and seriously bad publicity.

6. Enter A Session In A Bad Mood

This can be tough to achieve.

After all, everybody has bad days.

So there will be times when you’re just not feeling 100%. If that’s the case, and you simply can’t shake it off, cancel the session.

Make an excuse if you have to, but don’t continue in the hope that things will be fine.

Because they won’t. Also remember not to take your own personal judgments into a session with you.

If you’re depressed or upset, or in any other kind of negative mental state, then you know what’s likely to happen.

You should always “go first” to lead your client through a session. But if you’re feeling low or pessimistic, or there are some bad vibes drifting out from you, then your client will pick up on it.

And when that happens, hypnosis isn’t likely to work.

Canceling an appointment might cost you a few bucks. But what will it cost you in the long run if you go ahead, knowing that your attempts will likely be futile?

You won’t win any prizes for being the hypnotherapist who can’t deliver the goods.

7. Use The Same Scripts Or Techniques For Every Client

They’re all people, but what else have they got in common?

Apart from the need or desire to see a hypnotherapist, not very much.

You don’t have to be a genius to know that at least three things will happen as a result:

1) The medication will only work on some people

2) The medication could have serious side-effects for other people

3) The doctor will get into big trouble, which could range anywhere from a substantial lawsuit to being struck off altogether

One of the great things about hypnosis is that it has variety built in. There’s no need to be a one-trick pony, because the options are nearly endless.

Combine that with the individuality of the people you see, and it only makes sense that you should tailor your sessions to meet their specific needs.

8. Neglect To Bring A Subject Safely Out Of Trance

As mentioned above, hypnosis provides you with a variety of techniques to help people.

Depending on your client’s situation, your sessions can get very emotional, particularly when dealing with sensitive issues.

Or when you’re doing regression work. Sessions such as these can be both exhausting and liberating in equal measure.

But the last thing you want is to leave your client hanging. So make sure you bring them safely out of a trance and confirm that they’re feeling well.

Guide them gently back to consciousness, and give them some time to recover before they leave.

You want them to feel refreshed and good about the session, so that hopefully they’ll be keen to come back for more.

IMPORTANT: Whatever you do, don’t let your subject drive until they’re fully back to normal waking consciousness!

9. Make False Claims About Your Skills

Hypnosis is a powerful tool, but it has its limitations.

You can’t make skyscrapers disappear or turn frogs into princes. Be realistic about your abilities and your clients will value your honesty.

The truth is that you can’t hypnotize everyone right away.

Some people need multiple sessions to learn to be a good hypnotic subject, and others might resist your attempts.

Even if coming to see you was their own idea. So don’t be afraid to let them know if you can’t help them, or if it might take several sessions.

Tell people the truth about what you might be able to help them achieve, and make sure they know it isn’t a 100% guarantee of success.

That way they’ll be armed with all the facts and be better able to decide for themselves if they want to try hypnotherapy.

Of course, the other side of the coin is pretending you can do miracles, which might lead to a whole stack of problems you’ll find yourself having to talk your way out of. If you’re a professional, it’s only natural that you charge for your services.

You may have come to hypnotherapy as a second or third career and rely on it to put food on the table. That’s absolutely fine and exactly the way it should be.

But as you probably know, hypnotherapy is one of the caring professions.

It demands patience, compassion, understanding, and the ability to deal with people in a non-judgmental way.

If you practice hypnotherapy in order to help people lead a more rewarding and fulfilling life, then you’re a star.

If you’re only in it for the money, then you’re something else entirely. But don’t be fooled. People aren’t stupid. They can spot a fake a mile away.

Even if it takes them a while, they’ll soon work out where your priorities lie.

And when they do, they’ll spread the word.

So if financial gain is your only motivation for practicing hypnotherapy, we’d like to offer you one small word of advice:

In one episode of CSI, Conrad Ecklie tells Gil Grissom that what he’s about to do could be a career killer. Grissom responds by saying:

“That’s what’s so sad, Conrad. You see this as a career.”

For Grissom, it’s not just a job.

A way to put his skills to use for the good of humanity.

If you practice hypnotherapy with that in mind, you won’t go far wrong.