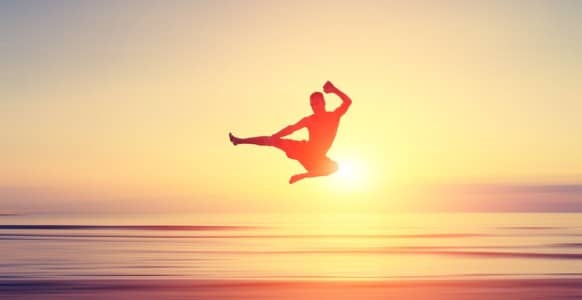 My journey into hypnosis started as a result of learning from a variety of hypnotists. But I also sought out the wisdom and teachings from a variety of well-known neurologists, anesthesiologists, molecular biologists, theoretical physicists and even martial artists.

And one teacher that really resonated with me in regardings to my hypnosis practice was actually Bruce Lee. Here’s what I learned from studying his teachings, and how I harnessed my hypnotic Black Belt Of The Mind as a result.

How To Attack! – according to Bruce Lee’s teachings

The function of hypnotherapy is much like what Bruce Lee described as 5 Functions Of An Attack:

He also noted that there are 3 factors in attack:

Bruce Lee learned Wang Chun as the base or first system of martial arts. Then he learned several styles of boxing, American fencing, Shotokan Karate and Tai Chi. Likewise, one should learn hypnosis from a wide variety of teachers and disciplines. To sum up his reason for accessing a wide variety of educational resources, Bruce Lee said:

“Man … he is constantly growing and when he is bound by a set pattern of ideas or way of doing things, that’s when he stops growing.”

Wow! That’s the main message of hypnosis, is it not? I would add, that’s also when the profession of hypnosis stops growing.

The Truth In Combat… (And Hypnosis)

After learning from a wide variety of martial disciplines, Lee taught “The Truth In Combat,” which is actually much like the truth in hypnosis: Jeet Kune Do practitioners believe in minimal movements with maximum effects and extreme speed. This is how hypnotherapists believe hypnotherapy differs from traditional psychological counseling and psychoanalysis.

Bruce Lee believed that combat was spontaneous, and that a martial artist cannot predict it, only react to it, and that a good martial artist should “be like water” to move “fluidly, without hesitation.” Likewise, hypnosis is spontaneous, because we are all spontaneously moving into and out of trance throughout the day. A hypnotist cannot predict someone’s hypnotic trance, only react to it, the good hypnotist moving instinctively, fluidly, without hesitation.

Has your hypnosis practice also been inspired by the words and wisdom of someone outside of the hypnosis sphere? If so, why not share how their teachings have had an impact on you with the community (just like how our guest author, Deborah, has done). To find out how, click here.