According to the American Psychological Association, trauma is an emotional response to a horrific event such as an accident, rape, or natural disaster.

Any shocking or dangerous event someone sees or that happens to them is a trauma.

They may not even realize they’re traumatized.

They’ll be in shock, feeling numb and detached – unable to deal with the emotional intensity of what happened.

Fortunately, hypnosis is a powerful tool for dealing with many common types of trauma.

In fact, hypnosis and trauma have a long and successful history.

Techniques such as regression can help clients come to terms with their traumatic experiences and enable them to get on with their lives.

That’s important because trauma is not a rare or unusual occurrence.

And while they might not readily admit there’s a problem, the emotional and psychological impact could be immense, making them feel: 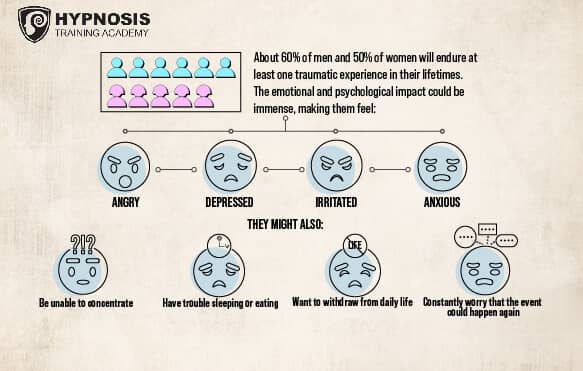 With more than half the population potentially affected by trauma, it’s lucky that hypnosis is such an effective weapon against it.

But before looking at how you can use it with your clients, let’s find out more about how trauma happens.

How Does Trauma Happen? 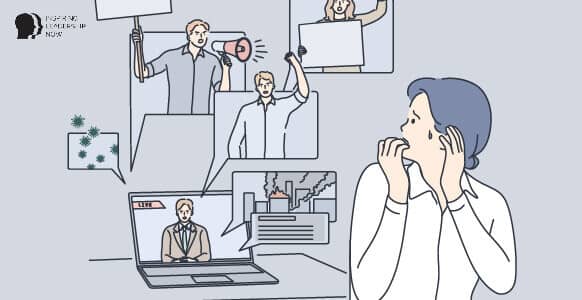 Trauma can happen whenever someone is subjected to an unexpected but terrifying event.

These kinds of events are both shocking and unsettling, throwing a person’s whole way of life out of kilter.

It usually involves two stages: first, some kind of harm or hurt takes place, physical or emotional, such as when someone punches you, for instance. Second, the memory of the event plays over and over in your mind.

This recalling of the event is what causes the trauma to occur.

An article at Healthline gives examples of traumatic events, which include:

Trauma can be caused by one-off or ongoing events. It’s possible to be traumatized if you are harmed directly or if you see someone else being harmed.

It can also occur when someone finds themself living in a traumatic environment or as part of a traumatic group or family.

The way trauma affects you could depend on a number of other variables, such as:

But it’s not just the trauma you have to consider.

Outcomes: The Trouble With Trauma

Here are three examples of the kinds of things trauma can result in:

This is a mental health issue that can develop following any traumatic or life-threatening event.

It’s a major side-effect of trauma, especially among military personnel who are often sent away from home and end up witnessing horrible scenes.

For most people, a traumatic event will mean they’ll feel anxious and on edge for some time. They may find it hard to get to sleep and could feel awkward engaging in normal everyday activities.

In most cases the effects might only last a few weeks. If they last longer than that, they may be experiencing PTSD.

Other factors can determine whether or not someone develops PTSD, such as if they’ve had previous traumatic experiences. It can also depend on their age and gender.

Here are the symptoms generally associated with PTSD:

Fortunately, hypnosis is one of the more effective ways of dealing with PTSD.

A phobia is an extreme and irrational fear of or aversion to something or some situation.

The fear is overwhelming and can be totally debilitating. It can lead to someone organizing their whole life around the fear, so that they avoid anything that might trigger it.

Phobias can develop quickly too. For instance, imagine a young boy who gets bitten on the ankle by a dog on his way home.

It hurts, he cries and runs home, telling everyone how horrible it was. From then on, just the idea of a dog fills him with terror.

An article on the Medical News Today website highlights the symptoms that the majority of phobia sufferers will experience:

Phobias have similar characteristics to PTSD, except that you don’t get re-traumatized by them in the same way.

Depression is a mood disorder that makes you feel constantly sad and without any interest in anything.

Being sad or occasionally depressed is perfectly normal. But if you’re suffering from
depression, the emotion runs deeper, leaving you feeling helpless and totally worthless.

According to the folks at WebMD, a person can be diagnosed with depression if they display 5 or more of these symptoms for at least 2 weeks:

Depression and PTSD share a lot of the same symptoms, like disrupted sleeping or eating patterns, drinking excess alcohol, being unable to concentrate and avoiding people.

Some sources state that depression is merely a way of coping with the aftereffects of a traumatic experience.

Hypnosis and trauma sessions give you the perfect tools and techniques to help your clients deal effectively with trauma and any inevitable symptoms that follow.

But what is it about hypnosis that makes it such a powerful weapon against trauma?

>>Related Article: How Hypnosis Is Used For Anxiety And Depression: An Important Guide For Hypnotists PLUS 3 Scientific Studies That Explain Why it Works

If the problem with trauma is what happens after the event, then it must be a function of memory. Hypnosis interacts with memory in four distinct ways:

This refers to forgetting about the trauma. It’s been used in the past and it can work, but with limited success. Just forgetting about the problem doesn’t mean it won’t pop up again unexpectedly or in other ways. Amnesia is a useful hypnotic tool but not a cure in itself.

This refers to vividly recalling a memory, with plenty of details, but without the emotion. It enables you to see the event very clearly as the client remembers it.

These two techniques refer to memory features on a sliding scale: amnesia means you don’t remember, while hypermnesia means you recall things vividly, although not necessarily with total accuracy.

This refers to reliving the moment, although you’re aware that you’re actually in the here and now. You’re re-experiencing a memory complete with all the emotions you felt at the time, so it’s taking hypermnesia to the next level.

This refers to going back to a previous time and forgetting about the present and the future, temporarily reliving the first instance of the trauma as if you were actually at that specific age and time again.

It used to be believed that memory was a constant that couldn’t be changed. However, recent research has shown that not to be the case.

And since hypnosis is so good at interacting with memory, that makes it a powerful tool for dealing with trauma and its after effects.

Any dangerous and horrific event can lead to trauma. About 60% of men and 50% of women experience trauma in their lifetimes.

Traumatic events might include the death of a loved one, friend or colleague, rape, a serious injury, or witnessing death or extreme violence.

The problem with trauma isn’t the trauma itself but the follow-on issues that it brings. For example, it can lead people to develop mental health issues such as:

What happens is that people relive the memory of the traumatic event over and over again, making it difficult to get on with their lives. Hypnosis and trauma sessions can help, particularly since hypnosis is such a powerful tool for interacting with memory.

Using techniques such as amnesia, hypermnesia, and regression, it’s possible for hypnotists to unlock the memory and remove the client’s fear.

When this is done, the client can recall the event without it having the same impact on them as it did previously. It becomes irrelevant and is therefore no longer a threat to their mental health and overall wellbeing.

Hypnosis And Client Attraction Part 1: Be Equipped With These Professional Tools To Attract Clients