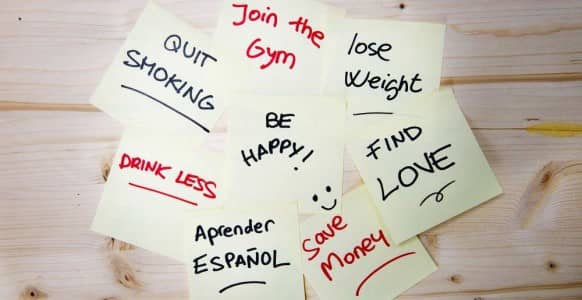 It’s that time of the year again where either yourself, or your clients, maybe more determined than usual to stop certain behaviors, or to adopt positive new habits, all in the name of self-improvement.

But what this also means is that many people will inevitably slip off the wagon during this pursuit.

So want to know the secret to making (and keeping) those New Year’s resolutions?…

The truth is that most New Year’s resolutions only last for about two weeks. Why? Here are some of the reasons:

Take 34-year-old Sara, for example. She decided to give up drinking alcohol. Her motivation was a combination of things including her general health and the price of alcohol. Drinking less would make her feel better and give her more disposable income. At least that was the idea.

For two whole weeks Sara stuck to her guns. Then one night she was out with the girls at a local restaurant. Everyone else was drinking, and before long she gave in to temptation. She only had a few drinks, but it was enough.

Next morning, Sara felt terrible. Not physically sick, but disappointed. She felt like she’d let herself down. She had a drink, even though she’d promised herself she wouldn’t. It was just a couple of glasses of wine, a lot less than she might have had in the past. But for Sara it meant she’d failed.

People who make resolutions every 1st of January do it for one of two reasons:

In other words, maybe you want to stop smoking, stop eating sugary foods, stop watching so much TV, or stop biting your nails. Stopping yourself from doing something can be hard work because you’re trying to break a long-standing habit.

In Sara’s case, that’s exactly what happened. She’d been drinking on a regular basis for years. A glass or two of wine with her evening meal. Then lots more wine on the weekend. The desire to pour herself a glass of wine – or order one from the bar – was powerful. She’d been doing it forever, or so it seemed. Putting the brakes on wasn’t quite as easy as she thought it would be.

In the second category, maybe you want to start exercising, start reading more, start saving money, or start learning an instrument. This can be almost as difficult as category one because you’re trying to add something to your daily or weekly routine.

It’s estimated that only 3% of people are able to give up smoking without any help. And you probably know someone who bought an exercise bike and never used it. Despite their best intentions, it ends up stuck in the corner, somewhere to chuck clothes or dry the towels on.

So why exactly is it so hard to keep those New Year’s resolutions going?

Give Yourself A Break Give yourself a break and set realistic goals

The truth is, when it comes to making lifestyle changes, you’re too hard on yourself. You don’t allow yourself any leeway. It’s all or nothing, black or white, succeed or fail. But that’s the wrong way to look at it.

Take Sara, for instance. She managed to stop drinking for two whole weeks. One lapse set her back a bit, but it shouldn’t have been enough to discourage her from trying.

In her case, she slipped up. Whoops. No big deal.

If she’d simply gone back to her original plan and stuck with it, she’d be fine. Instead, she thought to herself “I failed.”

What she should have realized was that she’d actually succeeded in her goal for 14 days. An entire fortnight. That was the longest she’d gone without consuming any alcohol for years. Rather than feeling dejected, she should have been rejoicing.

It’s a similar story when people start a new diet. They find it easy during the first couple of days because their motivation is high. They’re determined to feel healthier, lose some excess weight, and stop shoving empty calories down their throat. But then it all goes belly up.

They crave the kind of food they used to eat. They binge and stuff themselves with anything in sight. Like Sara, it makes them feel like they’ve failed. In reality, however, they haven’t failed – they’ve simply dropped the ball.

So how do they react?

They assume the diet is too tough. They think they won’t be able to stick with it. They decide to try a new diet… and within a couple of weeks, the same thing happens again.

Ironically, if they’d simply let themselves binge for a bit, and then gone back on the same diet again, they’d be fine.

That’s why anybody who tries to break an old habit or establish a new one needs an Escape Clause.

You Need to Be Realistic

One of the problems with resolutions is the time frame. You’ve probably tried to break a bad habit yourself in the past. What happens?

For most people, they’re able to hold out for about two weeks. Up to that point they can cope. But sooner or later their bodies start craving whatever it used to be able to enjoy. That’s when those slipups can occur.

When you make a New Year’s resolution, your aim is to stop or start doing something. Your goal is to eliminate the bad habit for good – or to add a new and positive habit to your life. But you don’t cut yourself any slack.

Imagine a child learning to ride a bicycle. He tries hundreds of times to keep his balance, hold on to the handlebars, turn the pedals and move the thing forward. He gets frustrated, his parents encourage him, and he struggles.

It never enters his mind to give up. All his friends can ride a bike, and he knows it’s just a matter of time before he’ll be able to.

What would happen if he’d set himself a time limit? Or if his parents told him he needed to be able to ride the bike by the end of the month? Or if not, the bike would go back to the store? How much extra pressure would that have put on his little shoulders?

Day after day he keeps trying, and sooner or later BAM! It all comes together.

You can do the same.

Instead of thinking you’re going to achieve your resolution without any hiccups, be realistic.

Set yourself small goals that you know you can achieve.

Go easy on yourself and allow yourself to make mistakes.

Start with a plan for two weeks. After the time is up, give yourself a reward. Then, start a new plan for three weeks. If you only make it to two, that’s another small success. And, naturally, you deserve another small reward.

You Already Have the Power Never forgot: You have the power to achieve your goals!

You repeat these simple tasks, and many more, every single day.

Discipline is built into your life, but because these things have become habits, you don’t realize it. Brushing your teeth every day is just a habit. It’s just as easy to stop biting your nails every day, provided it becomes a habit. The secret is to get through one day at a time and set a realistic goal that you know you can achieve.

It’s easy to get impatient and wish the hard part was over. But that’s not how it works. In fact, as soon as you start feeling those cravings return, you know things are working.

When you’re dying for a drink, or you’d kill for a cigarette, you know your body is struggling to cope. It’s reminding you about what you used to let it enjoy. It’s sending you a signal which you need to interpret in the right way. And that signal means…

And if, for whatever reason, you give in to the urges, don’t sweat it. Let it pass. Accept the fact that you’re a human being with weaknesses, and move on.

That’s the simplest way there is to make any kind of resolution stick. Do it for as long as you can, slip up if you need to, and then get right back on the bicycle and keep pedaling.

Aim for an amount of time you know you can cope with. When things get really tough, call in your Escape Clause. Keep reminding yourself of those small successes and, sooner or later, they’ll start adding up.

Your body will adapt to your new regime. Your thoughts will begin focusing on other more important things. The habit you’re trying to break or establish will become part of your routine, and eventually you won’t even give it a second thought.