Did you know that about 50% of adults suffer from a headache at least once a year?

And when those headaches are migraines, they can cause serious problems.

It’s not just the pain… it’s also the way they can be so debilitating; making it impossible for people to carry on with their lives as usual.

As a hypnotist, it might not come as a surprise that you can use hypnosis for migraines. In fact, there are at least 7 hypnosis techniques to choose from.

While there isn’t room in the space of this article to go into all 7 techniques at length, we will be discussing how a revivification can ease pain and even prevent migraines at their first signs, to give you an idea of how hypnosis can help.

However, before we get down to the nitty gritty, here’s some information that will help you gain a better understanding of the causes and effects of a dreaded “headache on steroids.”

What Are Migraines & Who Suffers From Them?

The word “migraine” brings to mind the idea of a terrible, severe headache. It can manifest as a throbbing or pulsing sensation, often on one side of the head.

As well as the pain, migraines usually involve other symptoms. These can include nausea, vomiting and extreme sensitivity to light and sound.

The pain from a migraine can last for hours or for days, and it can be so severe that it leaves a person unable to do anything until it passes.

According to the American Migraine Prevalence and Prevention Study, approximately 12% of Americans suffer from migraines. Nine out of 10 sufferers are unable to function normally when a migraine strikes, and a third of those require bed rest.

Research by the World Health Organization states that migraines mostly affect those aged 35-45, and that they are twice as likely to occur in women.

Migraines can have 4 stages, although sufferers may not experience all of the stages.

According to the World Health Organization, migraines are the result of a mechanism in the brain that releases pain-producing inflammatory substances around the nerves and blood vessels of the head.

Although an exact single cause has yet to be identified, there are certain things that are known to trigger migraine attacks. These include:

IMPORTANT NOTE: A migraine is a medical condition. Before you work with someone who claims to be suffering from a migraine, make sure they provide you with a referral from their doctor. The referral will ensure that you are treating them for an actual migraine, rather than for a pain caused by or related to something entirely different.

There are also 4 keys to wellness that should be at the front of your mind when dealing with any client with a medical condition. You need to find out how they’re doing on the following fronts: 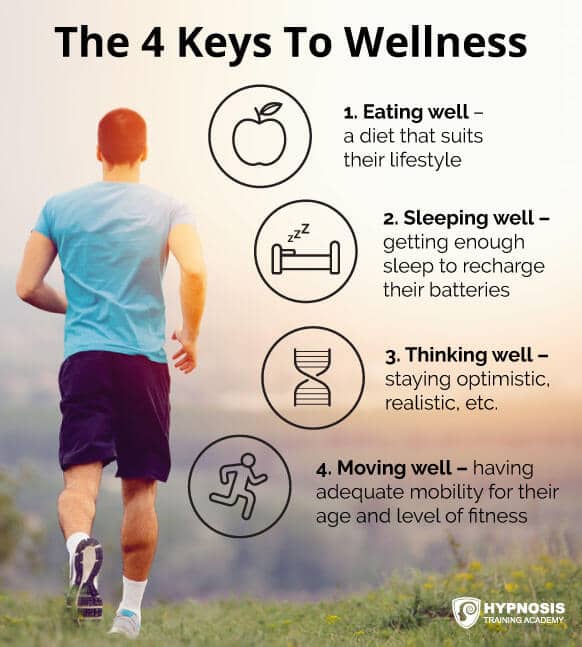 Likewise, if one area is below par, it could have a dramatic effect on their overall wellbeing.

Now that you know what causes migraines, it’s time to find out how to use hypnosis for migraines… and how to prevent from even occurring.

IMPORTANT NOTE: Poor diet leads to a host of physical, mental and emotional issues. If your client is experiencing severe headaches and migraines for this reason, you might need to address their eating habits and food triggers first. Check out this in-depth guide to discover how to use hypnosis for weight loss: Hypnosis For Weight Loss: A Complete Guide To The 5 Key Reasons People Gain Weight & The Techniques You Can Use to Overcome Them

When using hypnosis for migraines, these are the 7 core hypnotic techniques you can use (and combine):

But as discussed earlier, we’ll just be looking at the benefits of using a revivification in this article. 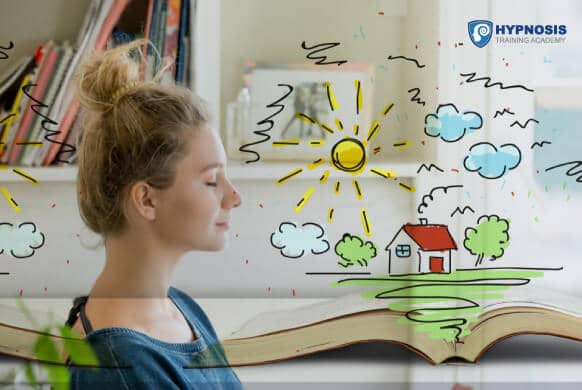 A revivification is used to revivify or bring back to life a pleasant memory. Your client will be able to remember the event clearly and will also be able to experience the emotions he or she felt at the time.

This technique has a strong and positive effect that will help diminish the pain caused by the migraine. It works by giving clients the resources they need to solve problems for themselves.

During the prodrome and aura stages, your client will be experiencing signs that something is happening. Particularly at the aura stage, they’ll start to feel the migraine coming on, so they need to change whatever they’re doing.

In this sense, the revivification works more like an education tool, giving your clients options once they’ve left your office so they don’t just feel like they have no choice but to wait for the pain to begin when the next migraine strikes.

So this technique empowers them to take charge of something they have previously felt powerless against.

For instance, suppose they’re going through a particularly stressful period. They might begin to feel one of those aura signals (pins and needles, blurred vision, etc.) which would be a cue that they need to take better care of themselves. They need to make sure they’ve eaten properly and have had enough rest.

They should also try to find time to relax, perhaps doing some deep breathing or meditation. Migraines are often associated with stress and tension, so any practice that helps them to relax and de-stress will go a long way towards relieving the pain or lessening its impact.

Pain is as big part of a migraine. Interestingly, though, 40% of the pain people feel is actually due to their anticipation of the pain. That’s another reason why revivification is such an effective tool to use in these cases.

A revivification is all about tapping into a pleasant memory, creating a positive effect, putting your client into a good mood, and changing the way they experience the pain of a migraine. Once you’ve taken them through a revivification, they’ll know that they can cope with the pain more easily next time they feel a migraine coming on. They’ll have the resources they need to:

You’ve probably heard the expression that where attention goes, energy flows. That’s true with migraines as well. As long as your client’s attention is focused on the pain, the pain will be more intense. Get them to focus on something else, and the pain will diminish. That’s the power of a revivification.

The main function behind a revivification is to intensify an emotional experience. But it’s also possible to find resources from a memory that isn’t quite so pleasant.

For example, suppose your client tells you that they’ve just finished a really tough exam. They might not have felt particularly elated at the end of it. In fact, they might tell you that they felt drained and exhausted and are just relieved that the whole thing is over with.

That exam could symbolize their ability to overcome difficulties, to endure when the going gets tough. So even though it might not have been a “pleasant” experience for them, they nevertheless can extract some real benefit from it, which is their ability to face difficult situations and find the resources within themselves to get through them successfully.

So next time a client comes to you feeling powerless against their repeat migraines, why not try a revivification and arm them with the tools to take back control.

If you are concerned regarding the step-by-step procedure involved for controlling pain, the Hypnotic Pain Control intermediate online training program is for you.