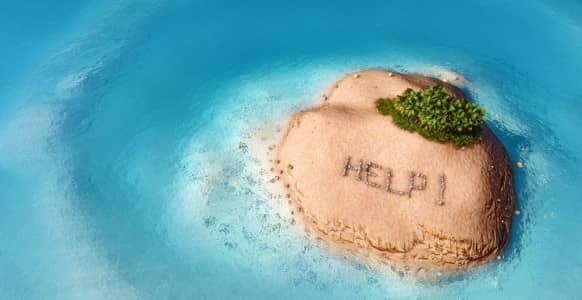 And Scottish sailor Alexander Selkirk  is ship-wrecked and marooned by himself on a desert island some 400 miles off the coast of Chile.

All he had with him was a rifle, some gunpowder, a knife, and some carpenter’s tools.

The desert island was both a hostile and desolate environment.

His only company were wild animals – some that would sink their teeth into  him if he didn’t protect himself.

So he decided to keep to the shoreline, slept in a cave, and found enough to eat by catching fish.

That worked for a while.

But he soon fell into a deep depression.

He knew he would run out of gunpowder, his knife would get rusty, and his clothes would rot on his back.

And he wasn’t sure that he could survive on just fish.

All in all, he did not have enough supplies to get by for long and the loneliness was crushing.

So he did the only thing he knew how to do in the circumstances.

He started “going inside his mind” and visualizing himself safely getting off the island and back to safety.

He kept this up for day after day – visualizing himself being rescued.

It was the only thing keeping him going.

Then it all went BADLY wrong…

The shoreline was suddenly invaded by sea lions, coming ashore for the mating season.

This forced Alexander inland into the deep, dark unknown of the forest – and all the wild animals it entailed.

What Alexander quickly discovered is the forest provided him with everything he needed to survive his ordeal.

He built a series of huts out of native wood.

He taught himself to hunt goats with a spear.

He even made his own clothes from animal hides.

Then, finally, after quite some time on the island he was rescued and returned home.

Years later, when he was an elderly man, Alexander said his ordeal on the island actually turned out to be one of the happiest periods of his life.

We all have the capacity to go “inside our minds” through self-hypnosis and fashion our lives in such a way that opportunities come to us, goals are met and the happiest moments in our life find us– often out of the most extraordinary circumstances where solutions seem non-existent.