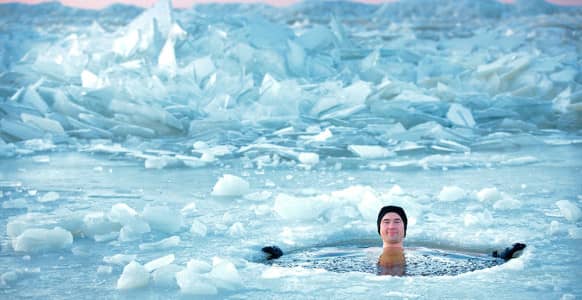 This guy is capital N-Nuts!

Because he swam in the Arctic Ocean to the North Pole in seawater that was around 29 degrees fahrenheit – that’s around -1.5 degrees centigrade!

Any normal person who fell into seawater that cold could not survive more than a minute or two.

So how does Pugh swim in the sea at temperatures that would kill most people?

He is apparently able to increase  his body temperature by self -hypnosis alone.

The self-hypnosis Pugh uses is a process that Noakes has dubbed:

Noakes first noted this extraordinary ability during a training session.

Before entering the water, Pugh cast his mind back to a traumatic parachuting accident he witnessed when he was a soldier in the British army, reliving the event in detail.

Noakes recorded an increase in Pugh’s body temperature and over the next fortnight, as Pugh was exposed to more cold-water swims, he was able to increase his temperature even further, eventually peaking at 101 F.