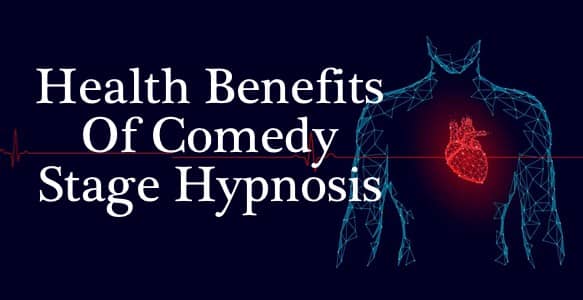 You know that stage hypnosis has the power to do enormous good.

You also know that laughter has the ability to bring you out of the darkest, deepest despair.

Put the two of them together, and what have you got… comedy stage hypnosis!

A powerful combination that can lift your subject’s mood while transforming their health, wellbeing, and immunity at the same time.

Stage hypnosis is hypnosis that is performed in front of an audience with its main purpose being to entertain.

The addition of comedy gives it a lighter, fun element that helps to leave people feeling uplifted. It also shows them that hypnosis can be enjoyable and pleasurable.

Because let’s face it: the days when a hypnotist could stand in front of a crowd and deliver a serious show, hoping to impress them, are probably over.

There’s a lot of stress associated with modern life, and people want to be entertained during their downtime. They can choose to go to a cinema, a musical, the theatre, or somewhere similar where they know they’ll have a good time.

So the stage hypnotist has to be able to deliver the same thing.

Any type of stage hypnosis makes use of 3 basic strategies:

But why they’re compliant isn’t as important as the fact that they are.

The hypnotist will test the volunteers a number of times to make sure they are suggestible. This begins from the moment they’re asked to come up onto the stage.

As a rule, only the most extroverted and willing members of the audience will volunteer. But even then, the hypnotist will test them further by asking them to do simple actions in order to check for compliance and to select the most suggestible from the bunch.

Historically, some hypnotists have made use of sleight-of-hand strategies to mislead the audience, usually for dramatic effect. This might have included whispering instructions to volunteers to act in a certain way or using stooges in the audience whose obedience other bona fide members of the crowd will then follow.

It’s common for a stage hypnotist to prime the audience even before selecting any volunteers. 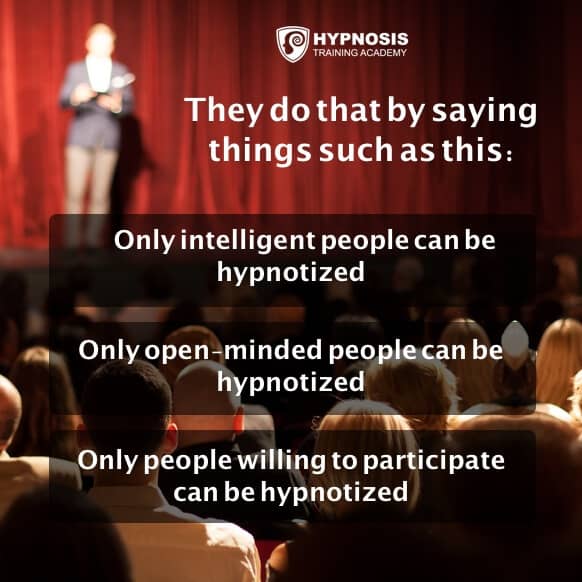 These ideas help to weed out the people who don’t really want to be hypnotized, such as members of the audience who might think they’re too clever and will, therefore, resist everything the hypnotist says.

Of course, the audience has chosen to be there, so they’re already in the mood for being hypnotized. And the people who willingly volunteer to go up on stage have already switched off their critical factor. These points tend to make things a little easier for the hypnotist.

Lastly, you have to remember that it’s a show.

The audiences have paid good money to see people doing stupid things, making fools of themselves, and generally having a good time.

If the show isn’t entertaining, they’ll post bad reviews, and there won’t be much of an audience for the next one.

Why Is Comedy Such An Important Part Of The Act?

In a nutshell, the comedy element is there because it makes people laugh.

When they laugh, they feel good. And knowing that hypnosis makes them feel good just might get them curious about using it for other aspects of their life.

Even if they weren’t on stage themselves.

After all, if a hypnotist can make someone dance whenever they hear a bit of upbeat music, then what else can they do?

If they can make someone fall asleep, or freeze their arm, or make them think they can speak a foreign language, then just imagine what other things they can achieve.

Once you start thinking about the possibilities, the options are almost endless. And it’s the comedy that opens the floodgates.

But the laughter has another less obvious purpose as well. It’s a well-known fact that laughter delivers a whole host of health benefits.

For starters, it’s impossible to feel stressed when you’re laughing. But that’s just the tip of the iceberg.

Here’s what the folks at the Mayo clinic say laughter is good for: 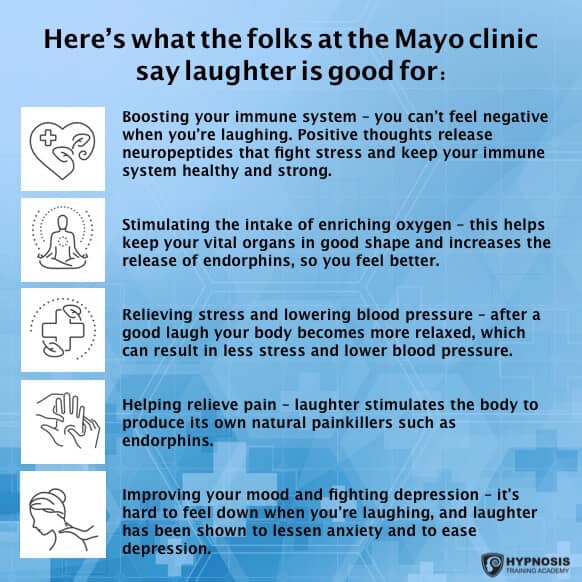 So laughter is good for your health. But not just your physical health.

There are plenty of benefits that laughter can bring to your mental health too, such as:

Laughter relaxes your whole body and might even help you to live longer. According to a study in Norway, people who laugh a lot tend to outlive those who don’t.

Who knew humor was such a powerful force in keeping you healthy? But why is that the case?

What happens in your body when you laugh that makes this particular activity so remarkably beneficial?

What’s Going On In Your Body When You Laugh

But there’s more to it than that. None of this would matter if it weren’t for your limbic system. That’s the part of your brain that experiences fear, anger and pleasure.

When the message goes from the frontal lobe to the limbic system (this joke is funny), the latter triggers the physical reaction that we call laughing.

Those are the mechanics believed to be behind laughter. But they make your body do a lot more than simply emit a chuckle or two.

Because when you laugh, your body physically changes. Your heart beats faster. Your pulse quickens. Your blood pressure rises. Your breathing rate changes and you take in extra oxygen.

On top of that, the level of the chemicals in your brain is altered.

Hormones that are good for your overall health and well-being (such as dopamine and endorphins) are increased, while those that can be harmful (such as cortisol) are reduced.

Laughter strengthens your immune system by increasing the production of antibodies that fight off disease. And there’s nothing better as a quick pick-me-up than having a good laugh at your favorite joke, sitcom or comedian.

In fact, a 1979 Canadian university study found that people with a healthy sense of humor were less prone to suffer from anxiety or depression.

Along the same lines, an article for PubMed by the Department of Physical Therapy, Sahmyook University states that laughter therapy has a “positive effect on the mental health and the immune system”.

They go on to say that laughter therapy is an “effective and scientifically supported” treatment for helping people improve their quality of life.

>>Related Article: What Is Self Hypnosis Used For? Discover How It Regulates These 6 Essential Chemicals So You Can Live A Happier & Healthier Life

Laughter Really Is The Best Medicine

So what does all of this information tell you?

It tells you that a good laugh has the power to keep you physically and mentally fit. 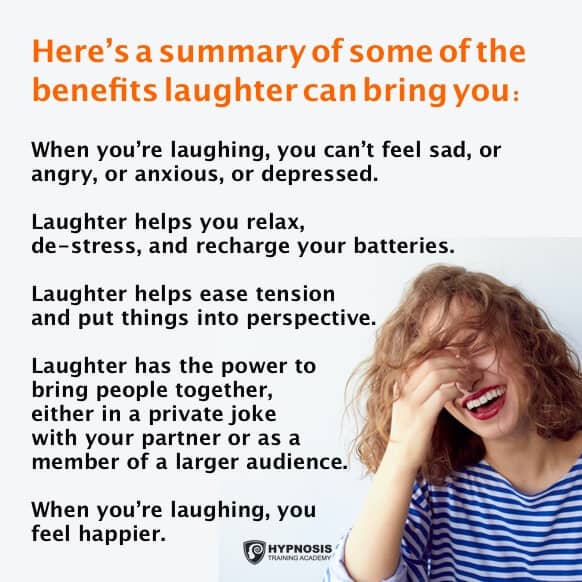 Perhaps that explains why so many stage hypnotists use comedy in their acts. It gives them a chance to show what they can do while at the same time providing some hilarious entertainment for their audience.

That includes big names like Marc Savard, who can be seen in Las Vegas. Then there’s the man known as the world’s fastest hypnotist, Don Spencer. Or Richard Barker, aka the Incredible Hypnotist, an expert comedy stage hypnotist who likes to help people understand what hypnosis really is.

And that’s an important point to remember. Whether stage hypnosis involves comedy or not, it is a powerful tool that can help change lives.

And even off the stage, even just one hypnosis session could be the difference between living a life full of potential and promise, or living a life weighed down by stagnation and doubt.

Hypnosis has so many practical applications that it would be impossible to list them all within the confines of this article.

Suffice it to say that whatever your subject’s need help with, hypnosis can come to the rescue. That might be improving their golf game, getting over a fear or phobia, managing weight, giving up an unhealthy habit like smoking, beating anxiety, or increasing confidence.

And if it can be done with humor in the mix, then the session (or show) is likely going to be even more pleasurable and enjoyable.