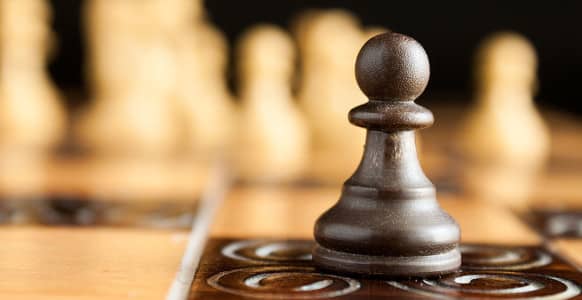 In 2010, the South African golfer Louis Oosthuizen was a rank outsider to win the British Open Championship at St. Andrews.

His performance leading up to the tournament had been poor.

And so, when he took a four shot lead at St. Andrews he was fully expected to crack under the pressure of the cut-throat final round.

And the reason for that was surprisingly, though deceptively, simple.

Namely: A small red dot on his glove (located conspicuously just below the base of his thumb).

The idea for the red spot came from Karl Morris, a sports psychologist.

Morris was called in by Oosthuizen to help him stay calm in the “heat of battle” and play at his full potential.

So Morris devised the red spot process: Whenever Oosthuizen was about to take a swing, he was to concentrate his full attention on the red dot on his glove.

Doing so put Oosthuizen into a calm, centred “meditative like” state just as he was about to take his shot.

And – just like in the golfing movie Bagger Vance – Oosthuizen “became one with the field of play”.

Did it work? Oosthuizen won the tournament by 7 shots.

The point? The red spot used by Oosthuizen is a classic example of what sports psychologists call a…

It is designed to centre the player in the moment (completely “untouched” by the scale of the occasion or the roar of the crowds) and allows the player to perform their sporting action free from any internal mind chatter.

Whatever you refer to it as – using process goals can help you perform to the best of your ability as well… especially with hypnosis.

All you have to do is concentrate fully on the individual process at hand – and the result will take care of itself.

Something else that can really help your mastery of hypnosis is what sports psychologist Jason Selk calls a solution-focused approach.

Jason has worked with many uber-successful sporting individuals (including Olympic Gold medallists, NASCAR drivers, NFL pros and golfers in the PGA).

He’s also worked with corporate executives in the business world.

And what Jason has found is that all the successful people he’s worked with have in common is they have developed and maintained a relentless solution-focused approach to their careers and their lives.

What exactly is the solution-focused approach? Well it is encapsulated in this question you can ask yourself (in regard to your hypnosis development or indeed any area of your life you want to improve): “What is ONE thing I can do that could make this better?” Everyone can come up with ONE thing.

And it gets you moving toward your solution (i.e. the outcome or objective you want to get to).

Why not adopt that relentless solution-focused approach to your hypnosis development? You can start right now.

Just ask yourself the question: “What is ONE thing I can do that could help me become a better hypnotist?” Then do that one thing.

Rinse and repeat! BTW, Jason Selk’s has written a great book that sets out an entire process for performing at your optimal level – it’s titled: “10-Minute Toughness” and sub-titled: “The Mental Training Program For Winning Before The Game Begins” (Note: the process, although aimed mostly at sport people in the book, is equally applicable and replicable to anyone who wants to improve their performance in any area of life).

Anyway, my point is not to pitch a book.

My point is when performing hypnosis focus on process (not the result or outcome).

And when you’re training in hypnosis continually ask yourself the one thing you can do that could help you become better.

Just those two steps alone can put you W-A-Y ahead of the pack!