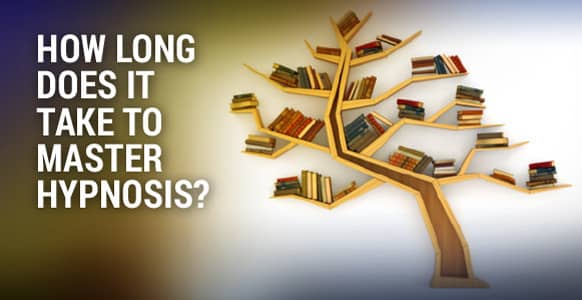 To tie in with World Hypnotism Day, and perhaps any New Year’s resolutions you had to master this life-changing art, we thought we’d answer a question that those new to hypnosis often contemplate…

“How long does it take to learn hypnosis?”

You spend most of your life doing it.

Learning how to walk, how to speak.

Learning how to understand other people.

Learning how to make sense of the world around you.

Learning a specific skill or trade.

In fact, you never stop learning, no matter how long you live.

There’s always something new to discover. And your brain is built to make sure you can learn it all.

So whether you want to learn how to skate, how to paint, or how to fly a plane, the process is the same.

Even if you want to learn hypnosis.

Of course, mastering a skill takes things to a whole other level.

It requires learning the basics, applying them regularly, and keeping up-to-date.

Practicing the skill until it becomes second nature.

And if that was all there was to it, it’d be easy. The good news is, is that it is.

You just have to take it step-by-step.

What It Takes To Learn Hypnosis If you want to master hypnosis, you need to keep a few things in mind.

Like learning any other skill, it depends on a number of variables, such as:

There is one other variable that people often overlook when it comes to learning something new.

And that variable is – you.

No matter where you go or who you meet, one thing’s for sure.

Even identical twins are not identical in every sense. It’s the subtle differences that make them – and you – unique.

So if you want to learn hypnosis, do it in a way that suits you.

A way that you’re comfortable with.

A way that fits in with your personality and your lifestyle.

Because, let’s face it, if it doesn’t fit in with any of those, it’s not gonna happen.

That doesn’t mean you should dismiss the idea because you think you’re too lazy, or haven’t got hours and hours of time on your hands.

It just means that, before you get started, make sure you know what you’re taking on.

Like any other skill you learn, make sure you digest the information in small, easy steps.

Take it one step at a time, master that one, and then move on.

They don’t sit down after their first lesson and rip through a Rachmaninoff piano concerto.

They start simply, finding their way around the keyboard.

Learning the scales and chords.

Playing pieces that help them get familiar with the instrument.

With what the notes sound like in different combinations.

Finding out what the pedals do, and why they do it.

Progressing at their own pace.

Growing in confidence with every new piece they learn.

With every new challenge they overcome.

Until, eventually, that piano concerto doesn’t seem quite so daunting.

To Become A Hypnotist, You Must Practice Hypnosis The old saying “practice makes perfect” is a bit of a cliché, isn’t it?

But that doesn’t make it any less valid.

The difference between someone who’s good at what they do, and someone who isn’t, often comes down to how much practice they put in.

And that applies even to talented individuals like Wayne Gretzky or Tiger Woods.

They didn’t get to the top of their game with raw talent only.

Spending every spare hour on the ice or the golf course.

Refining their technique every time they picked up a stick or a club.

Always trying to be better.

Totally dedicated to mastering their skill.

And if you think that’s baloney, think again.

Ask any experienced teacher if they’ve ever had a really bright student who just didn’t do any work.

You might know someone like that who was in the same class as you in grade school.

Clever, witty, capable, but as lazy as the day is long.

Not willing to put any effort into learning.

And you can bet that attitude continued throughout their whole life.

On the other hand, people with only minimal skills can often surpass their more talented friends.

Just by knuckling down and being committed to learning.

They seem to know that if they put the time in and keep trying, good things will happen.

They might even know they’re not naturally gifted, but that doesn’t stop them.

They believe in themselves.

They know they’ll get there in the end.

Because, as Vincent van Gogh put it:

“If you hear a voice within you say you cannot paint, then by all means paint and that voice will be silenced.”

What Happens When You Learn A New Skill? Think you’re too old to learn something new?

Too set in your ways? Nope.

Your brain is capable of learning anything, given the right stimulation.

It has more ram than even the biggest and fastest computer.

The billions of brain cells inside your head are constantly communicating with each other.

Every time you do something new, they create new neural pathways.

Keep on doing it, and those pathways become grooved in, established.

Which means that eventually, that new skill won’t be new anymore.

It’ll be easy. It’ll feel comfortable. It’ll give you satisfaction and confidence.

You’ll be able to do it, rather than just wishing you could.

And then, you can start building on it.

Becoming something of an expert at it.

Knowing that you’ve achieved what you set out to achieve.

But it all starts with that first step.

You need to walk before you can run.

You need to be patient and give yourself a chance to soak it all up.

You need to recognize that it might not always be easy, but the key to success is to just keep on going.

Here are 3 things to remember on your journey to mastering hypnosis:

And remember that help is often a lot closer than you think… So as you may have guessed by now, the answer to how long it takes to learn hypnosis (and master it) is really not dissimilar to answering how long a piece of string is.

Or how long it takes to learn a new language, or particular style of dance.

As there are many variables involved.

However, more often than not, the most significant success-hindering factor boils down to your level of commitment. Which of course is a positive thing.

As it means, it’s all within your control. That if you practice everyday, perfect the basics and don’t give up at the first, second or third setback, you’ll most probably experience results quite quickly.

And given the potential it has to dramatically change your life (not to mention the lives of your subjects), the payoff for this initial commitment really is (as the saying from those famous Mastercard commercials goes)… priceless.