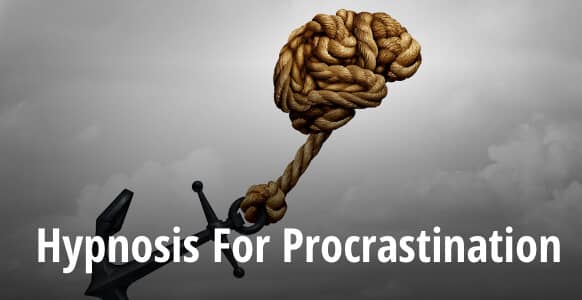 Charles Dickens wrote “procrastination is the thief of time”.

But what is procrastination really?

And like so many other bad habits, it can be hard to change.

Unless that is, you take advantage of a well-known technique that’s been helping people conquer their bad habits for many, many years.

That technique is hypnosis.

In fact, using self-hypnosis for procrastination is probably the simplest way to beat it.

Why? Because self-hypnosis allows you to connect with your unconscious mind where you can access your own inner resources.

And once you can do that, you’ll be able to:

And last but not least, quickly and easily get rid of bad habits.

But aside from being an unhealthy habit, what else do you need to know about procrastination?

What Is Procrastination & Why Do People Suffer From It? 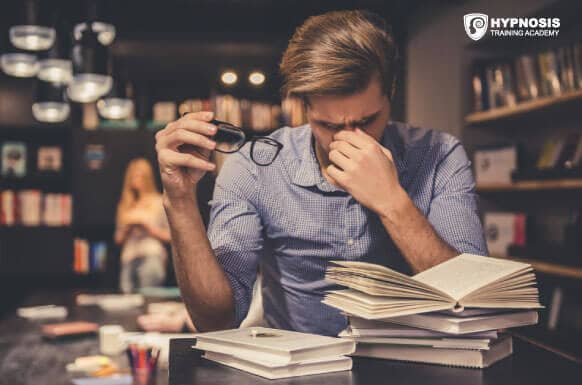 Stephen King said that “amateurs sit and wait for inspiration, the rest of us just get up and go to work”.

Instead of getting up and going to work.

But it’s not laziness, because lazy people are perfectly happy doing nothing.

Procrastinators, on the other hand, know they should be doing something, and as a result they feel guilty.

The longer they avoid doing what needs to be done, the worse they feel.

So what causes procrastination in the first place?

An article on the Verywell Mind website, explains that procrastination can be caused by:

According to some researchers, there are two main types of procrastinators: 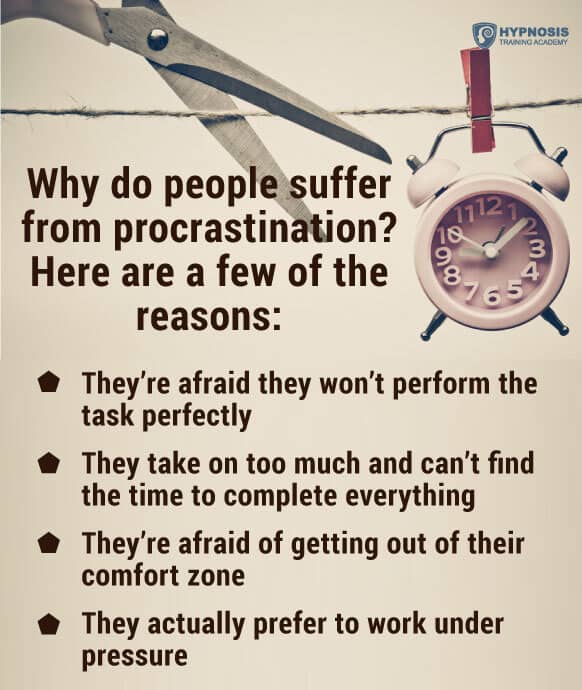 Generally speaking, procrastination is more or less a state of mind rather than a disease. When it becomes chronic, however, it can have a serious impact on a person’s lifestyle.

In cases such as that they might pay bills late, leave working on projects to the very last minute, file tax returns after deadlines, and so on.

Obviously, this kind of behavior is going to affect their mental health and every aspect of their life, leading potentially to:

That tells us what procrastination is and how it affects people. But what triggers it?

An article on the A Life Of Productivity website claims that there are 7 potential triggers for procrastination.

According to the article, you’re more likely to procrastinate when:

Some sources point to what they call the symptoms of procrastination, which could include feeling like:

With symptoms like those, it’s easy to see why someone might procrastinate. If you’re not sure what the goal is, how can you know where you need to start? Or where you’re going?

Likewise, if you’re faced with too many tasks, how do you know which one to tackle first?

Both of these symptoms would make it difficult to focus, and you’d feel foolish tackling anything that felt as ambiguous and overwhelming.

Nevertheless, procrastination is a self-sabotaging habit that doesn’t do you any favors. Fortunately, the power of hypnosis coupled with NLP anchoring techniques gives you everything you need to manage it effectively.

Hypnosis For Procrastination: Combining With NLP Anchoring For Increased Effectiveness

NLP anchoring is a kind of classical conditioning which in most cases requires a lot of repetition to work.

But once you add in the hypnotic elements, you’re able to tap into the power of expectancy.

That means there’s no need for so much repetition. It also means that you can set the anchor and get to work more quickly.

How? By pairing stimulus and response together using the Law of Association.

Using the NLP anchor in this way is a form of hypnotic trigger or post-hypnotic suggestion.

It’s all about the power of expectation.

For example, how do phobias occur? And how are problems created in people’s daily lives?

There has to be some sort of stimulus and a corresponding response.

For instance, imagine a work scenario where the atmosphere is toxic. Staff get yelled at, it’s very stressful, employees are constantly on edge and no one feels secure or valued in any way.

Just thinking about the look on the boss’s face or the sound of their voice can be enough to trigger the feelings of dislike and unhappiness.

So how do you counteract it?

Well, the Law of Association is the fundamental way the unconscious mind likes to reason.

Associations and anchors are being set all the time. Like the boss’s face or voice triggering feelings of despair and sadness.

The important thing to note here is that most stimuli tend to be one of two things:

When working with a hypnosis subject, all you have to do is pair something you see or hear with something they’re experiencing. Then add expectation to the mix so they realize they need to pair the two together (the Law of Association).

Here’s an example of how that might work in practice:

Later when the client has a problem, just leaning in and smiling will trigger the response (i.e. the good feeling).

This technique is essentially the same as the PCAT Formula. You can find more information about this formula by checking out our article on Using The PCAT Formula During Conversational Hypnosis.

With the PCAT Formula, you start with the parameters of the problem, what your client wants to have or become, and that sets the expectation.

Next, you bypass the critical factor. This helps them understand that life doesn’t have to be a certain way and that there are lots of other possibilities.

You also need to be aware of collapsed anchors. This refers to replacing the conditioned response with a resource.

For instance, hearing the boss’s voice can frighten you and make it impossible for you to function. You need a resource that’s stronger than the fear to collapse the anchor.

What might that be? The feeling of being empowered would do it. Whatever resource is used, the stronger it is, the more it will drain away the negative emotion.

Collapsing anchors represents the second half of the PCAT Formula, A for access resources and T for transform.

Transform refers to thinking about the problem, applying the new resources, and realizing there’s no longer a problem.

Once you know how to use anchors in this way, there’s almost nothing you can’t achieve. The important thing is to be sure to set the triggers you need and then to release the triggers at exactly the right time.

Self-hypnosis is simply hypnosis that you do to yourself.

It gives you the chance to get in touch with your own unconscious mind so you can reprogram it with positive messages. And you can do it practically any time and anywhere, given the right conditions.

Once you’ve got your goal in mind, self-hypnosis helps you reinforce that goal by getting the unconscious to support it.

One of the easiest ways to do this is by accessing your own inner resources. 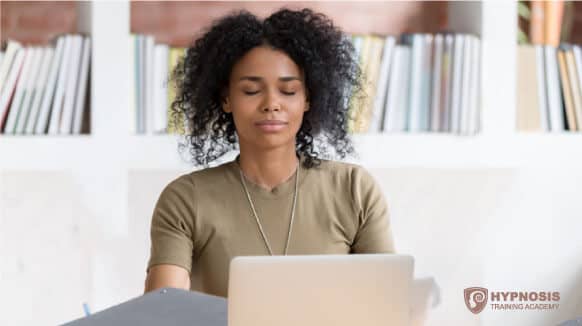 Here’s a basic step-by-step guide on how to go about it using self-hypnosis:

If you can, you should practice this kind of self-hypnosis several times a week to help stimulate your unconscious mind and reinforce the changes you want to make.

And that highlights one of the reasons why self-hypnosis is so effective. As soon as you prime your unconscious mind with your goal, it begins working to help you achieve it.

Self-hypnosis really is a powerful tool for setting and reaching any goal, no matter how big or small. Here is a simplified 6-step system you can use to do exactly that:

1. Write your goal down on paper.
2. Stimulate your unconscious mind by stating how you will feel when you reach your goal.
3. Set yourself a small mini-goal to help you move closer to your main goal.
4. Work through a self-hypnosis session upon completing steps 1 to 3.
5. Carry out the mini goal in step 3.
6. Repeat the steps until you reach your goal.


And remember to always use these hypnosis skills as a force for good to empower yourself and others to make positive and lasting changes. 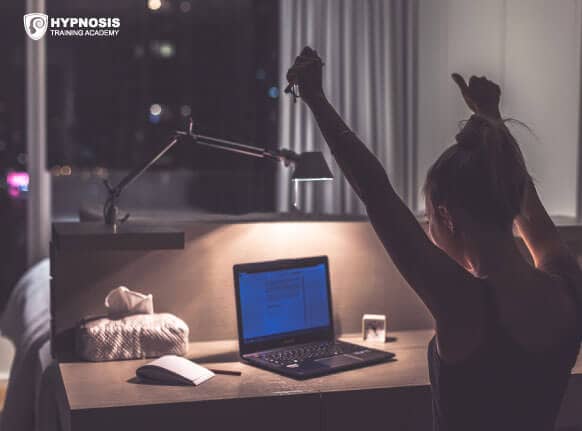 Procrastination is basically just a bad habit, and one of the best and easiest ways to kick bad habits is with hypnosis or self-hypnosis.

People who procrastinate aren’t lazy. They’re just unable to get started on a task or project for a number of reasons, such as:

Chronic procrastination can result in putting off things that can adversely affect every aspect of a person’s life, like not paying bills on time or leaving projects to the very last minute.

This kind of behavior can affect someone’s mental health, making them feel more stressed, making those around them resentful, and putting a strain on their relationships.

The combination of Hypnosis with NLP anchors is an effective and powerful way to overcome procrastination. It works by pairing stimulus and response together using the Law of Association.

The NLP anchor becomes a form of hypnotic trigger or post-hypnotic suggestion.

To make it work, you have to pair something a person sees or hears with something they’re experiencing. Here’s how that might work in practice:

It’s basically the same as the PCAT Formula, where you start with the parameters of the problem, what your client wants to have or become.

Next, you bypass the critical factor, helping them to realize that there are lots of possibilities.

Then, collapsing anchors help them access a resource that’s more powerful than the stimulus to drain its negative emotion away.

Collapsing anchors represent the second half of the PCAT Formula, A for access resources and T for transform.

Once they’ve applied the new resources, they’ll realize there is no problem, and they’ll be transformed.

It’s possible to beat procrastination using self-hypnosis too. Here’s how that might work:

Managing self-sabotaging habits and procrastination with hypnosis might be the best way for some people, but it all boils down to the inner will of the person to take on the route to positive change, 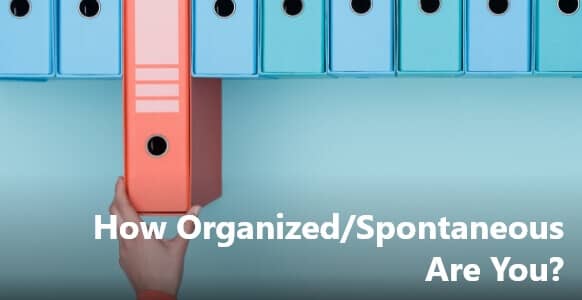 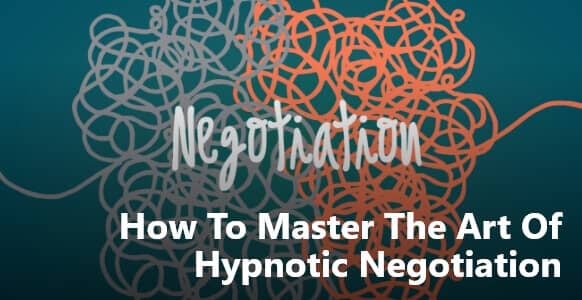