The author Dorothy M. Neddermeyer is quoted as saying: “Life is ten percent what you experience and ninety percent how you respond to it.”

That’s what makes regression therapy such a valuable hypnotic tool.

… it’s how you responded to it.

So a traumatic situation isn’t necessarily traumatic in and of itself.

The trauma comes from your response and how you deal with it.

And that’s why using Hypnotic Symbolic Language and Regression Therapy are such a powerful and effective duo.

They help you go back symbolically and change the memory of the event.

That means you can also change the way you responded to the event – as well as the way you dealt with it.

Being able to do that enables you to take the new version of the event forward into your life, which basically eliminates the trauma for good.

But what exactly is regression therapy?

How does it work and what’s it got to do with the Hypnotic Symbolic Language (HSL) System?

To understand regression therapy you need to consider it as having two distinct elements. There’s the regression element and the therapy element.

Regression is a hypnosis technique that lets you change a memory by reliving that memory from a different perspective. The idea is to get so absorbed in the experience that you lose track of the present or future completely.

This technique has been shown to be useful as a way to overcome past trauma or to remove a long-standing phobia. It’s also perfect for when someone feels stuck because of an intense emotional experience that’s preventing them from moving forward positively.

The therapy element refers to the fact that the technique is benign or that it transforms something. In the case of HSL and regression, it transforms the memory of an event so that it no longer holds the person back from making progress.

Regression therapy involves taking someone back to a previous time in their life so that they temporarily relive the experience as if they were actually there, at that specific age and time again.

You need to pull the person into the memory and the best way to do that is through a strong emotion.

As soon as you have a strong emotion in place, it’s relatively easy to regress the subject. 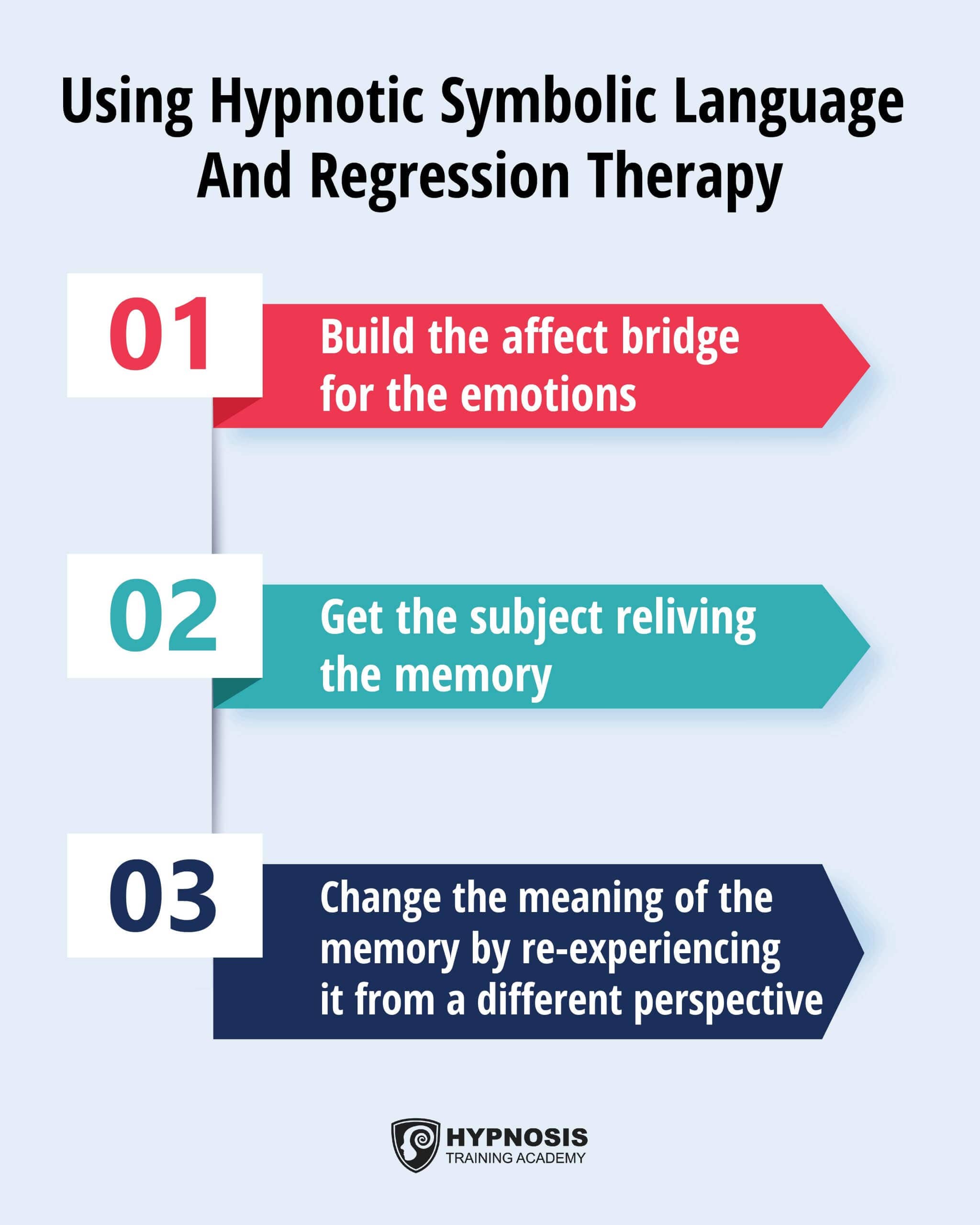 There are two important points to note before moving on.

The first concerns the term affect bridge, which is based on the principle of state-dependent learning.

The second point revolves around the word perspective. Why is perspective so important?

Simple. Your perspective is completely different from when you’re happy to when you’re sad.

Change the perspective and you change the meaning, which also makes it more likely that the therapeutic impact can be achieved.

But how can you achieve a regression using symbolic language?

Regression therapy starts with an emotion, which you can simply follow back to the actual memory.

Once you are there, you need to ask three questions, which are:

To whom does this belong?
How old are they?
What are they wearing?

At this point you will have regressed to the memory, but you won’t have changed anything yet. The meaning is still the same.

In order to change the meaning, you need to ask another question that implies an action. And that question is:

4. What would they want to wear?

Typically a regression takes people back to early childhood. At that point they wear the clothes that they’re told to wear.

As an adult looking back, when you ask what clothes they’d want to wear, you’re giving them the freedom to see the experience from a different perspective.

It’s a way of turning the perspective of the experience into a meaningful symbol, which in this case is the clothing the person wanted to wear.

The Purpose Of Regression Therapy & When To Use It

Regression therapy is a powerful way to deal with a trauma or to overcome some other kind of blockage in your life.

In a nutshell, it’s a totally fantastic way to solve problems.

For instance, suppose something happened at some point in your life and no matter how many years have passed, you still feel guilty about it.

The guilt is preventing you from living a full and rewarding life, because it’s always in the back of your mind, eating away at you.

To eliminate those guilty feelings and thoughts, you need to do a couple of things.

1. Change the way you think about the experience that caused the guilt in the first place
2. Look forward to the kind of life you can have when things are different

So the problem is the feeling of guilt, and the solution or preferable outcome would be the elimination of that guilty feeling.

Using symbolic language, the next step is to give both of these aspects a symbol: a problem symbol and a solution or outcome symbol.

To put it another way, you metaphorize them. So you ask:

These symbols are useful because they help to shield you from whatever it is that’s causing the issue.

Another thing to remember is this. A regression implies taking the person back in time to something they experienced when they were a small child. The easy way to do that is to turn the idea of connecting into a feeling.

That’s because the experience is embedded in the feeling, (the affect bridge), which can take the person back to the very first experience where they felt that way.

Regression is basically a tool that can be used to change memories. They don’t even have to be real memories as long as they symbolize something.

The point is to change how someone relates to the memory, which should naturally be in a helpful and positive way.

During a regression, the subject will experience the memory in the first person. As far as they’re concerned, it will feel like they are literally there in that time and place.

They will lose all awareness of the present and will act and speak just as they would have done at that earlier time.

Unlike a revivification, they’re not just observing the memory. In a regression, they’re participating in it.

It’s so intense that nothing else matters in that moment.

That’s why feelings and emotions are so important. If you can change the way a person feels about a certain experience, you give them the freedom to think and behave in different ways.

The more engaged they are in the memory, the more likely it is that they will be able to generate the emotion they need to move forward.

When they express their problem and outcome in terms of metaphors and symbols, that makes it easier for them to look at things from a different perspective.

That is significant, because perspective is everything.

And nothing helps put things into perspective better than a bit of regression therapy.

Using Hypnotic Symbolic Language and Regression therapy is a valuable hypnotic tool to help someone overcome a past trauma or get over a problem that’s preventing them from moving forward.

It’s not actually what you did or what you experienced in the past that’s the issue; it’s how you responded to it.

Using Hypnotic Symbolic Language and Regression Therapy helps you go back symbolically and change the memory of the event.

Changing the memory means you can change the way you responded to the event, making it possible for you to move forward with your life.

This can be achieved using hypnotic symbolism as part of conversational hypnosis.

Regression therapy involves two elements. The first is regression, which is a technique that gets you to relive a memory intensely but from a different perspective.

The second is therapy, which relates to the benign nature of the technique and its ability to transform your life for the better.

The technique involves taking someone back to a previous time so they can experience it as if they were actually at that specific age and time again. The best way to do that is through a strong emotion.

A simplified step-by-step model of regression therapy would be:

1. Build the affect bridge for the emotions
2. Get the subject reliving the memory
3. Change the meaning of the memory by re-experiencing it from a different perspective

Emotion stimulates the memory, and once they’re in the memory you need to ask questions:

To change the meaning of the memory, you also need to ask:

4. What would they want to wear?

Regression therapy is a fantastic way to solve problems. It lets you assign symbols to the problem and the outcome, which in turn gives you the opportunity to:

1. Change the way you think about the experience that caused the problem
2. Look forward to the kind of life you’ll have when things are different

Regression is a tool that can be used to change memories thanks to the combined power of emotion and hypnotic symbolism.

Change the memory and you can change the way you respond to it.

And that gives you the ability to rewrite the past and look forward to a more rewarding and fulfilling future.

For more in-depth information on regression therapy and a look at the 12-step regression method, check out this Hypnosis Training Academy article.