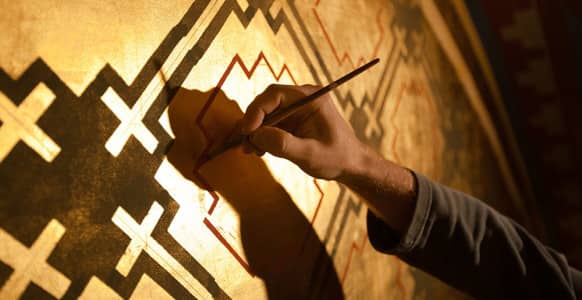 Curious to know why?

Sometimes something unusual is discovered when X-raying a painting.

When it happens – it sets the entire art world abuzz.

What do they discover?

That a lost masterpiece exists BENEATH the existing painting.

The portrait of a woman was discovered beneath Van Gogh’s Patch of Grass.

A Leonardo da Vinci sketch was hiding underneath his veneered Virgin on the Rocks.

And an earlier Picasso painting lies hidden under his famous Rue de Montmarte.

In each case, a masterpiece lay hidden beneath the “outer” painting.

This serves as a great analogy for us as human beings.

Our “outer” facade often conceals an “inner masterpiece” of talent beneath it.

Doesn’t matter where we come from.

And it doesn’t matter what we do in life.

In every case there lies hidden within us a masterpiece version of ourselves.

Unfortunately, this masterpiece within us will not show up on an X-ray or an MRI scan.

It only shows up when we bring it to life.

And the only way to bring it to life (to unlock it) is to follow our passions with an unrelenting zest.

The pursuit of our passions eventually reveals the true masterpiece that we are.

At first, you may not see it yourself.

Others most definitely will.

And soon you’ll begin to notice it too.

After all, when you go at your passions full-out you’ll suddenly be the living version of the masterpiece that has been trapped away inside you.

Now I don’t know specifically what your passions are.

But if they involve hypnosis, I know you can become a “masterpiece of the hypnosis world” IF you pursue your passion for hypnosis with an unrelenting zest.

Every great hypnotist has got to be that way by pursuing their passion for the subject in that unrelenting way.

So, if your passion is there – why not join them?

Your “inner masterpiece” demands it!