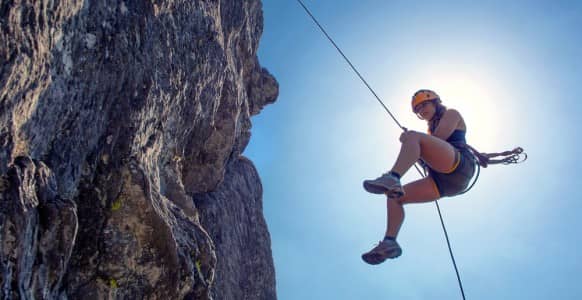 “There is no elevator to success: you have to take the stairs.”

Especially if you know how to ABSAIL.

Okay, descending a near-vertical surface using ropes is called “abseiling,” and is spelt differently to how it’s written above, but the sentiment is much the same. Let’s check it out…

Getting To Grips With The ABSAIL Formula

But before you get “climbing,” let’s do a quick recap of the 4-stage hypnotic protocol.

The ABSAIL formula is basically an extension of this. It includes the first two stages listed above, with additional stages (S, A, I and L) designed to help influence people’s behavior. Change someone’s behavior, and you can change their outcomes.

Each of the letters in the ABSAIL formula stands for a particular step that will help you master the art of persuasion:

B – Bypass the Critical Factor

Here’s how it works:

If you hope to persuade someone, to influence them in any way, you need to have their attention. They need to be absorbed in what you’re saying and what you’re doing. Unless you can get their attention and really hold it, nothing else you do or say will be of any use.

How can you get their attention? There are lots of ways to do it, and one of the simplest is to just tell them a story.

Ever been to a kindergarten or pre-school class? Spend the day there and you’ll notice an almost magical transformation.

Young children generally have short attention spans, and the teacher has to constantly try to keep them occupied. They’ll spend about 15 minutes doing one thing, and then they’ll move on to something else. If the teacher hasn’t got their attention for any length of time, there’ll be chaos.

It can happen in a flash. Kids running around everywhere, screaming, chasing each other, throwing toys, shoes, food around the place. Occasionally someone gets hit by a flying projectile, or bumped into and knocked over. That leads to tears, more screaming, and even more chaos.

But then, when it’s story time, every last one of them stops what they’re doing. Sitting at the table pouring an imaginary cup of tea for Mr. and Mrs. Bear suddenly loses its appeal.

Teacher’s going to read a story!

Young children – and some not-so-young – will give up almost anything to hear a good story. It captures their imagination in a way that almost nothing else can. They soak up the plot like sponges, wanting to know what the characters are going to do next. And they’re gripped even when they know what’s going to happen, as if the anticipation alone is enough to keep them on the edge of their seats (or carpet). Read a book, watch a film, listen to your favorite music, go to the theater, the opera, the ballet. Each one of these activities gives you permission to relax. You can suspend your disbelief and enjoy being entertained.

No need for your conscious mind to pass judgment.

You want to be entertained, and so you switch off your inner critic. You’ve paid for the tickets, found a comfy seat, and you just want to have a good time. All the performers have to do is put on a half-decent show, and you’ll be happy.

Because you’re already engaged. You’re interested. Your analytical mind is taking a break, leaving you free to soak everything up.

Likewise, if you can find a way to bypass someone’s critical conscious mind, it’s easy to persuade them. Telling a story is one way to do it.

Whichever method you use, the goal will always be the same. You want to sneak in under their radar and change their mood.

They just won’t listen to you, no matter how hard you try.

There are usually two reasons for using conversational hypnosis with another person:

You need to arouse their curiosity, fascinate them with your story, and get them enthusiastic about the future. How? By motivating them.

If someone stops smoking, for instance, they’ll save a packet of money. They’ll feel healthier. Food will taste better. Their skin will return to its natural, healthy color. They’ll have more stamina. They’ll even live longer.

Your job is to help them find the right state of mind, the right mood, to achieve their goal. That could be any state, including the following:

There are lots of ways to change people’s states of mind. If you’ve already got their attention in a good story, use that to maximum effect. Add some metaphors. Paint vivid pictures. Tell amusing anecdotes. Compare two things that wouldn’t normally belong together, like fish and bicycles.

Make an effort to get them as close to the desired state as possible, and then really start ramping things up.

The next two steps belong together. At this point you want to augment and intensify their emotions. For instance, you want them to imagine how wonderful they’ll feel when they give up smoking.

Fresh air in the lungs. No more coughing. No more phlegm in the throat.

It’ll be the start of a whole new chapter in their lives, free from the cravings, raring to go, and full of possibilities.

Of course, you can intensify things even further. Weave in your hypnotic language to really drive the point home…

“It’ll be so much easier to breathe when you give up smoking.

Every breath you take will bring life-giving oxygen into your lungs.

Every time you breathe in that oxygen-rich air cleanses your body.

And so on and so on.

By this time their emotions should be buzzing. They’ll start seeing themselves in their new life. They’ll be filled with hope and optimism, determined to live a happier and healthier lifestyle. They’ll be sizzling with excitement and lit up like a Christmas tree.

And that’s when you need to link those positive emotions to the action you want them to take.

Perhaps they want to lose weight. Or start exercising. Or stop procrastinating. Or manage their time more efficiently. Whatever their goal is, you need to tie that to an action.

It might simply be getting up 10 minutes earlier on weekdays. It might be stopping off at the gym on the way home from work. It might be going for a walk every evening to clear their heads. It might be putting away 5 dollars a week for a rainy day instead of spending it on tobacco.

It might be jotting down their feelings in a diary, keeping track of how much they spend, or going to bed 15 minutes earlier.

Whatever their goal is, the action should help them achieve it. It should give them a sense of purpose. They should think like this:

“If I take this action, or that action, I know I’ll be able to do it.”

In this case, “it” is the goal they want to reach.

Also remember that it’s easier to go down the stairs than it is to go up. They need to achieve one real success, no matter how small. Every success will give them the self-belief to move forward. They need to challenge themselves, but not with impossible tasks. One foot first, one step at a time.

When that’s been accomplished, they’ll have achieved two things:

And as soon as they get to that stage, the sky’s the limit, and the only way is up…