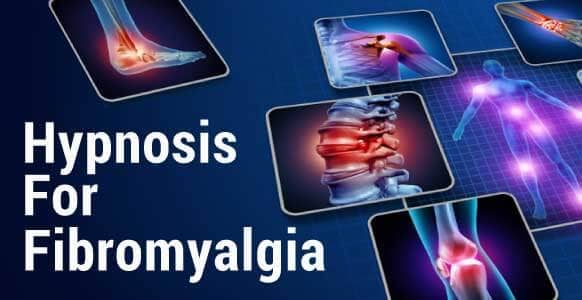 Imagine experiencing constant pain all over your body.

Being so sensitive that you can’t bear to be touched.

That’s what many sufferers of fibromyalgia have to deal with.

Fibromyalgia is a chronic condition characterized by pain (myalgia) in the fibrous tissues (fibro) and muscles of the body. It affects the way in which the nervous system deals with pain, amplifying painful sensations.

Since hypnosis is such a powerful tool for providing pain relief, it makes sense that you might use hypnosis for fibromyalgia.

No one knows exactly what causes the disorder, but it can be triggered by trauma, surgery, infection, or emotional distress.

Fortunately, hypnosis can be used to encourage the body to do its best and deal with the symptoms from the inside out.

But what symptoms should you look out for?

Fibromyalgia is often mistaken for other disorders including lupus, chronic fatigue, and rheumatoid arthritis.

It affects between 2% and 8% of the population, with women twice as likely as men to get the condition. It’s thought that as many as 75% of people with the condition remain undiagnosed because diagnosis is so difficult.

Sufferers may experience some or all of the following symptoms: 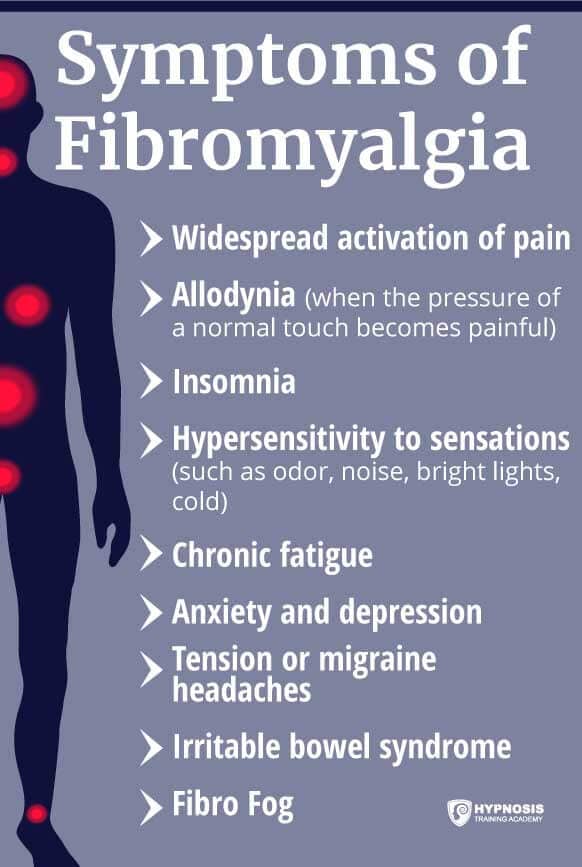 As if that wasn’t enough, there are other risk factors according to Mayo Clinic you need to look out for, including:

There are certain factors and behaviors that make it more likely that someone might develop fibromyalgia. These include:

This may be partly due to the fact that people lead more stressful lifestyles these days, something that is particularly relevant during the global pandemic.

>> You’ll find more information about the psychological impact of COVID-19 in our article The Psychological Effect of Covid-19: What Are The Experts Saying? – A Guide For Hypnotherapists On 5 Emerging Trends Of Anxiety From COVID-19

Who Is Affected By Fibromyalgia?

With so many potential symptoms and a condition similar to many other disorders, it has become practical to organize sufferers using a number of different categories.

That being the case, there are 4 different types of groups or classifications of people with fibromyalgia (FM). 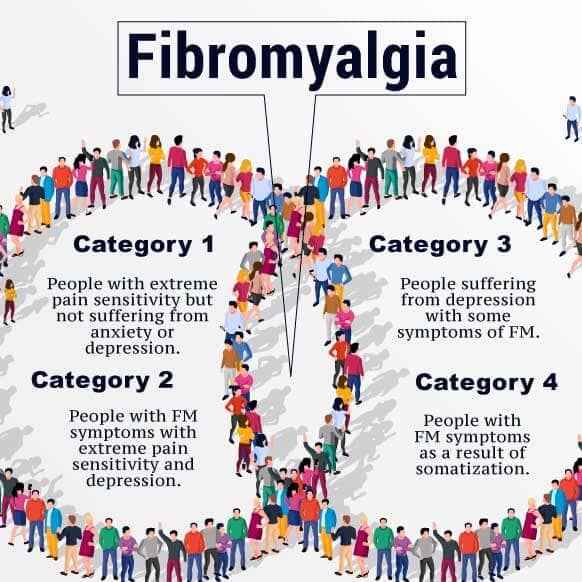 4 Areas To Consider In Helping Clients With Fibromyalgia

Remember that fibromyalgia is a medical condition. As a hypnotist, your goal will be to give your clients the tools to manage their condition as effectively as possible. And just like any other hypnotic intervention, you’ll be aiming to help them lead a more rewarding and fulfilling life.

One way to do that is to focus on the person as a whole. You can do that by concentrating on these four areas:

This is basically their diet. There’s a strong correlation between diet and FM. Obviously, junk food or fast food diet is not going to be healthy, so you want to try to motivate them towards a diet that gives their body the nutrition and sustenance it needs.

Getting enough sleep is crucial for sufferers of fibromyalgia. A study showed that disrupting someone’s sleep patterns in certain ways can actually mimic the symptoms of fibromyalgia. So proper refreshing and nourishing sleep is vital.

Aerobic exercise helps reduce pain and encourage sleep. It’s a key component of helping people get better. The idea is to exercise in small but frequent stages to build up stamina and endurance.

Things like mindfulness, yoga, and tai chi can help. CBT (Cognitive Behavioral Therapy) can be effective with the psychological element of the condition but has been shown to be a lot more powerful when framed as part of hypnotic suggestions.

What are the current medical interventions for fibromyalgia patients?

There’s no known cure for FM, so any treatments are focused on relieving the symptoms and helping people function in their daily lives.

Specialists also tend to treat the condition in different ways according to which of the four categories above the illness seems to fall into.

Other doctors might treat FM as more of a functional somatic syndrome or disorder. This happens when the patient’s physical pain is being caused by their own repressed psychological issues. So even though the cause is psychological, the pain they feel is very real, which doctors will have to help them manage.

Fibromyalgia is often treated in a similar way to rheumatic conditions such as rheumatoid arthritis because the symptoms mimic those other conditions.

The U.S. Food and Drug Administration (FDA) has approved a number of prescription medications for use with fibromyalgia. Drugs such as Lyrica (pregabalin), Cymbalta (duloxetine HCl), and Savella (milnacipran HCl) help reduce pain levels and improve sleep. 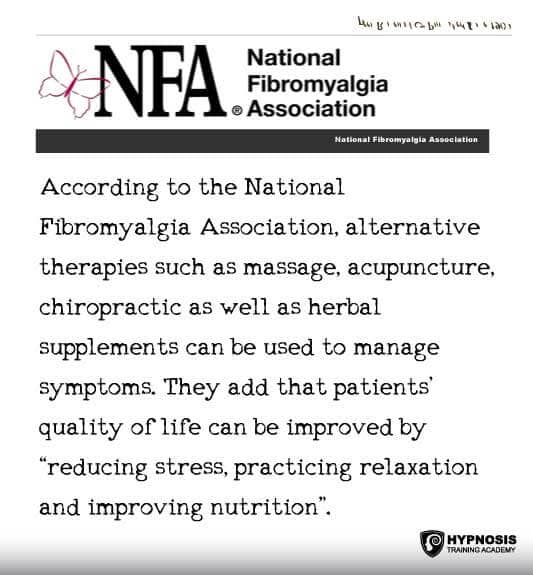 It’s easy to see why alternative treatments like hypnosis can be used to help sufferers manage their condition. After all, hypnosis is an effective way to treat depression, anxiety, and inflammation.

It’s also a powerful tool when working with underlying psychological conditions that end up causing pain. And both hypnosis and self-hypnosis have long been used for stress relief and for inducing deep and refreshing relaxation.

So which hypnosis techniques will be most effective in the relief of fibromyalgia?

Hypnosis For Fibromyalgia: Hypnotic Tools That Can Help Provide Relief

As a hypnotist, you have access to a range of tools you can use to help clients suffering from fibromyalgia. Here are 7 that you’ll find extremely useful, followed by a brief explanation of how to implement them:

It can be used to help a client suffering from fibromyalgia in a number of ways:

There are two kinds of identities that are helpful when using a blitz to help a client prioritize their values:

Revivification can be used when a client has given you a contrast frame about what they feel is bad about having fibromyalgia, to form a reference frame and make direct comparisons.

Revivifying moments of resiliency will help the client tolerate current conditions that might not be so comfortable for them. This can really empower them and show them that their efforts in many different areas can pay off with positive benefits.

DMI is a useful tool when your client needs a symbol to help elicit change. The symbol can be a sanctuary or something similar that gives them hope and a positive emotional experience.

The key to using a DMI successfully is always to presuppose the outcome that your client wants. The symbol they choose will help them get to this outcome.

The outcome is defined by the hypnotist and the client in the session. It could be something like pain control, or eating, sleeping or moving better. 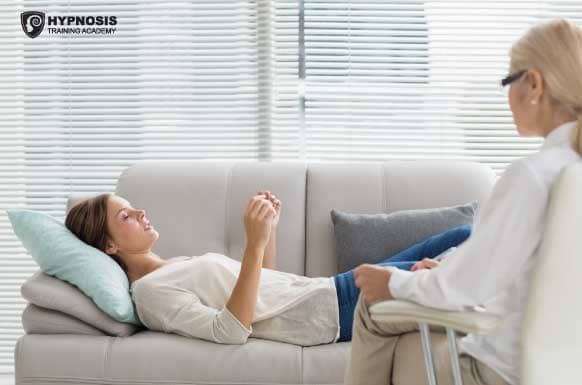 The key is to get the client to understand that their unconscious is working for them and trying to help them, even though they might not be aware of it.

It’s important that the client understands the logic behind this idea, which is that something has happened that they just aren’t aware of consciously. This is a type of DMI but using physical sensations instead of symbols.

The MBL is the concept of the trance of infinite possibilities where your client expands their options. It’s particularly useful when they’re stuck on the idea that they can’t do something, for whatever reason.

MBL is also useful when dealing with some of the symptoms of fibromyalgia, such as pain control. The technique shares a common thread with DMI and a Non-Awareness Set, in that your client has to want to achieve something in order for it to work.

Regression is basically a revivification with a DMI attached to it – a DMI that symbolically changes the way the client relates to that memory.

The use of safety to safety loop is key when working with regression therapy. The classic and simplest regression is the Elman version where the client literally goes back in time to relive a moment over and over again until it desensitizes.

When doing this type of regression therapy, you need to change how the client associates to the actual memory, or it can cause more problems. People who naturally overcome problems do so by thinking benignly whilst remembering them. That’s the key ingredient in regression therapy.

To help a client who is dealing specifically with fibromyalgia, you might regress them to a time before they were suffering from the symptoms of the illness. Another way would be to help the client reorient how they look at the actual illness itself, to fundamentally change their relationship to their illness, which can lead to their symptoms being improved.

You can do a reintegration conversationally or during an overt hypnotic trance.

Remember that you can use any or all of these techniques in any order you wish, depending on your client’s frame of mind and level of cooperation. In some cases a hypnotic blitz might be enough to offer some relief from the symptoms of fibromyalgia, while in others it might be necessary to work through each of the techniques in turn.

You’ll probably find that one technique leads you to another as you work and discuss things with your client. It doesn’t matter which tool or technique does the job, as long as you’re able to use your hypnosis skills to help improve your client’s quality of life.