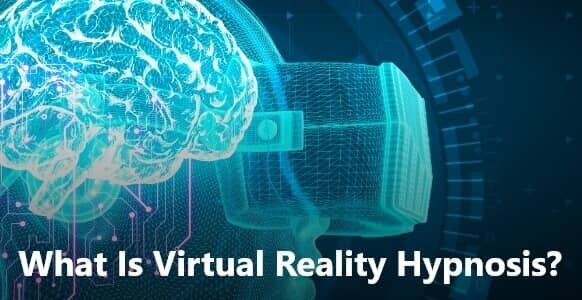 In certain old Hollywood movies, an evil professor uses hypnotic power to control the minds of all he meets.

“You’re getting sleepy,” he says, staring at them until they swoon under his spell.

It’s all hogwash, of course.

Partly because you can’t undergo hypnosis when you’re asleep, and partly because it’s impossible to control another person’s mind.

But that’s not what hypnosis does. It actually lets the subjects explore their own minds.

It’s a constantly evolving process, and thanks to the advent of virtual reality technology, its applications continue to expand.

So that now you can experience virtual reality hypnosis (VRH), combining these two techniques to create a new and fascinating concept.

And instead of the new technology (i.e. virtual reality) replacing or superseding the old (i.e. hypnosis), it’s helped to make it even more effective and relevant.

Proving that hypnosis is not a stagnant or outdated practice, but one that can be applied in clinical settings and used hand-in-hand with the latest technological advancements.

One particularly successful application concerns the management of pain.

Before finding out more about that, however, let’s look at some definitions of exactly what we’re talking about.

What Is Virtual Reality Hypnosis?

In order to understand what VHR really is, it might make sense to break down its constituent elements. Since it’s a combination of hypnosis and virtual reality, let’s briefly look at each of them separately.

Much of this article is based on a research paper by Rousseaux et al who examined 8 existing case studies involving hypnosis and VR.

The research paper describes hypnosis as a state of consciousness in which the subject has both focused attention and a reduced peripheral awareness. In this state they are more likely to be open to suggestions.

They go on to point out that hypnosis allows the subject to use their mind “to influence their own body sensations”.

The more hypnotizable a person is, the easier they will find it to alter their body’s physiology, emotions, thoughts or behaviors based on the suggestions they receive.

Virtual reality is a “computer-generated simulation of a lifelike environment”. Even though it’s simulated, the subject can interact with it and feel like they’re in that particular environment.

The interaction is achieved through the use of responsive hardware such as a visor and screen or gloves with sensors.

This involves immersing the subject in a virtual 3D movie as they are guided by hypnotic suggestions.

For the purposes of the research paper, hypnosis was delivered either in a live setting or via audiotape using VR total immersive headsets. Suggestions (including posthypnotic suggestions) could be made before, during or after the session.

The researchers wanted to find out which approach would be more effective at pain management:

All 8 case studies used the computer-generated VR SnowWorld, a 3D ice canyon where users can throw snowballs and make penguins and snowmen disappear.

For the hypnotic version, the joystick and snowballs were removed. Instead a voice suggested going deeper into the canyon to promote relaxation.

Suggestions were made either by a therapist in the room or were prerecorded on audiotape.

The studies employed different ways of combining VR and hypnosis, on their own, together, one after the other, and so on. In some instances hypnosis was used before VR, while in others participants were asked to practice self-hypnosis at home between sessions.

As you might expect, the results vary depending on which techniques were used and on the subject’s hypnotizability.

One study by Violeta Enea et al involved a control group for comparison. All 3 treatments (hypnosis, VR, and VRH) were more effective at pain management than the control group.

They also found that the more hypnotizable the subject, the more pain relief they felt. However, VR distraction was found to reduce pain even in subjects regardless of their hypnotizability levels.

And since hypnosis is a powerful tool for pain management on its own, the potential for clinical use of VHR seems almost limitless.

But just how good is hypnosis at providing pain relief?

How Hypnosis Can Help With Pain Management

Back in the 1950s and 60s, surgeon Jack Gibson used hypnosis on its own on patients undergoing plastic surgery, bone-setting and even amputations.

That shows how powerful hypnosis can be when it comes to managing pain.

Part of the reason is because a hypnotist uses hypnotic language to do a number of different things:

It’s possible to accomplish these things using conversational hypnosis and one or more of the following hypnotic techniques:

All of these techniques help to bypass the critical factor making it easier to communicate with the unconscious mind.

In fact, hypnosis has proven so successful at relieving pain that it has become an essential element of surgical operations in many parts of the world.

Known as hypnosurgery, it’s been shown to have serious benefits for everyone involved, including:

Hypnosurgery probably won’t replace anesthesia completely, but the combination of hypnosis and surgery is definitely here to stay.

That’s yet another example of how hypnosis can be adapted and used in combination with other techniques to provide a more powerful treatment.

But is it even more effective when used in conjunction with virtual reality?

Here’s what the research paper’s results tell us.

Pain As The Main Outcome In VRH Studies

These studies focused on acute pain and chronic pain. Acute pain is defined as pain lasting less than 6 months caused by a sudden incident, such as a burn, cut, broken bone, labor or childbirth.

Chronic pain is pain lasting more than 6 months that may be caused by headaches, nerve or back pain, fibromyalgia, arthritis and cancer.

Concerning acute pain, a severely burned patient experienced 40% less pain with VRH on day 1, and 60% less pain with hypnosis audio alone on day 2. Pain reduction rates varied between 44% and 85% for trauma patients in a separate study, with inconsistencies noted on all days.

In two different studies, VR alone produced pain reduction regardless of the subject’s hypnotizability, while hypnosis was more successful with highly hypnotizable subjects.

The authors concluded that “hypnosis and VR involve different mechanisms”. That makes sense, since VR works as more of a distraction outside the person, while hypnosis tends to deal with the problem from the inside.

A study by Patterson et al highlighted the fact that hypnosis and VR combined was more effective at reducing pain unpleasantness than just VR on its own.

The researchers also examined the amount of time subjects thought about pain and the impact these various techniques might have. As you might expect, highly hypnotizable subjects reported that they spent less time thinking about pain, regardless of the techniques used.

There is less evidence available for chronic pain sufferers. One patient experienced about 35% pain reduction using VRH in combination with daily hypnosis exercises. In another case, a patient with gluteal hidradenitis experienced a drop in pain intensity of 62% using VRH alone.

So what conclusions can you draw from all this evidence?

>> Related Article: What Can Hypnosis Help Treat? 16 Common Issues Resolved By Going Into A Hypnotic Trance

The Future Of Virtual Reality Hypnosis For Pain Management 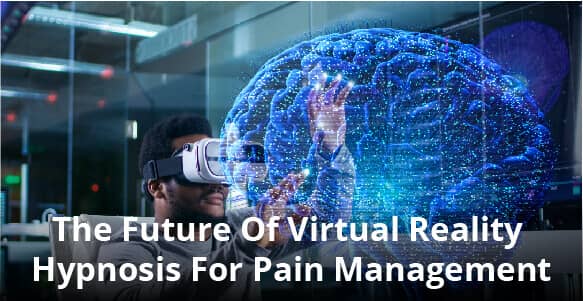 As the studies have shown, all three techniques have the ability to help reduce pain. The issue is that results are not consistent for all participants or across a number of days.

Despite that, new uses for the technology are starting to spring up. One of these is called HypnoVR, a multisensory tool combining hypnosis, VR and music therapy.

HypnoVR was created by a team of anesthesiologists and hypnotherapists. They realized that they were using hypnosis regularly in the operating room alongside anesthesia.

However, they didn’t always have the staff or time to perform as many hypnosis sessions as they wanted to. So they came up with a stand-alone tool that could be used as needed.

Hypnosis texts are performed by professional actors. Patients are able to choose from a selection of music and a theme such as a beach, a forest, outer space, etc.

The practitioner selects text that is specific to the procedure. After starting the software, the headset and headphones are placed on the patient’s head.

So far the results are impressive. For example, since using HypnoVR for pediatric surgery at the Hautepierre University Hospital in Strasbourg, they only need to use local anesthesia, reducing hospital time by as much as 66%.

Remember that the whole technique is based on hypnosis. This is further proof of the incredible power of hypnosis, further confirmation that hypnosis as a technique will continue to evolve and will be with us for many years to come.

Hypnosis is not a stagnant process but one that is constantly evolving.

Recently it has been combined with virtual reality (VR) technology to create Virtual Reality Hypnosis, or VRH, to help with pain management.

And while sometimes new technology replaces or supersedes other practices, in this case it has made hypnosis even more effective and relevant.

Virtual Reality Hypnosis involves delivering a hypnotic induction to a subject while they are connected to VR hardware and software, usually through a headset/screen and/or gloves/sensors.

Research has been undertaken to determine the effectiveness of this combined approach, with researchers examining subjects’ pain reduction during:

Results are often dependent on the hypnotizability of the subjects. The more hypnotizable they are, the more noticeable the reduction in pain they perceive.

Hypnosis on its own has a well-documented track record when it comes to pain management. A hypnotist will use hypnotic language to help the subject:

These things can be accomplished using conversational hypnosis and one or more of these techniques:

Hypnosis is regularly used during surgical operations in place of general anesthetic. Known as hypnosurgery, it has a number of major benefits:

Studies show that all three techniques (hypnosis, VR, VRH) are capable of reducing acute and chronic pain, with the greatest reduction occurring in those subjects who are most susceptible to hypnosis and hypnotic suggestion.

The combination of hypnosis and virtual reality has led to the growth of new technologies. One of these is HypnoVR, a multisensory tool created by anesthesiologists and hypnotherapists combining hypnosis, VR and music therapy.

It means that treatment can be available at any time through a stand-alone apparatus.

This is further evidence of the fact that the field of hypnosis will continue to grow and evolve and become an even more intricate part of our everyday lives. 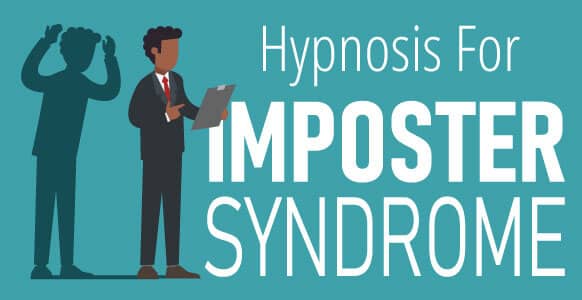 [GUIDE] Hypnosis For Imposter Syndrome: How To Manage Symptoms And Regain Self-Trust