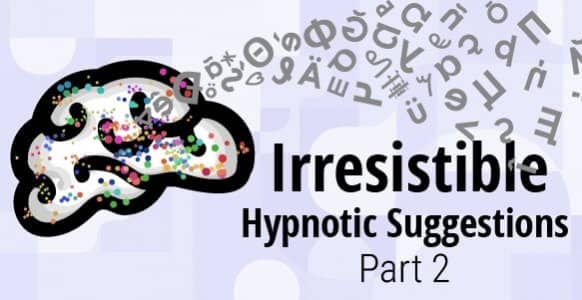 Want to discover everything master hypnotist Igor Ledochowski knows about hypnotic suggestions as well as 21 additional advanced hypnosis techniques? Check out this exciting collection of Advanced Hypnosis Masterclasses – they’ll answer every question you ever have when you get “stuck” doing hypnosis.

Welcome to Part 2 in this series on how to naturally create irresistible hypnotic suggestions.

Plus, you learned a fun way to create them using the fridge magnet principle.

In this article, you’ll add nouns (nominalizations and hot words), adjectives (trance themes & hyperboles) and unconscious priming to the mix.

But before we dive into all of that, there are a few important points to keep in mind whenever you’re constructing irresistible hypnotic suggestions:

IMPORTANT NOTE: It’s best to revise your lists and compile examples of hypnotic suggestions in your private study time – not when you’re with clients.

Reading from your notes or lists will give the impression that you’re unsure of what you’re doing. Plus, every subject/client is different. This is why we’re not an advocate for hypnosis scripts – each session needs to be customized for the client you have sitting in front of you.

Even when you know in advance what the client wants to address, other things often come to light within a session. For instance, a client comes to see you to quit smoking, but you discover that smoking helps reduce their social anxiety when they’re out in big groups. Meaning it’s not just the smoking element you need to address. It’s their anxiety and perhaps their self-esteem, that needs to be looked at, too.

Where hypnosis is concerned, there are two types of nouns that are particularly useful. These are:

The infant perished in the flames.

Tragic, of course, but it states the facts using relatively neutral language. Look how much more of an emotional impact it makes when it’s written using hot words instead:

The baby burned to death in the raging inferno.

The power of hot words is that they instantly connect with the other person’s emotions, which is another way for you to get their attention, right?

Nominalizations are abstract words used to describe concepts, things that don’t exist in the physical universe. That includes such things as love, respect, learning, joy, and so on.

Nominalizations are powerful hypnotic words because when your subject hears them, their unconscious mind is free to make up its own meaning for the word. Which is another way of stimulating their unconscious.

Here is a list of nominalizations that would be useful as part of a hypnotic suggestion: 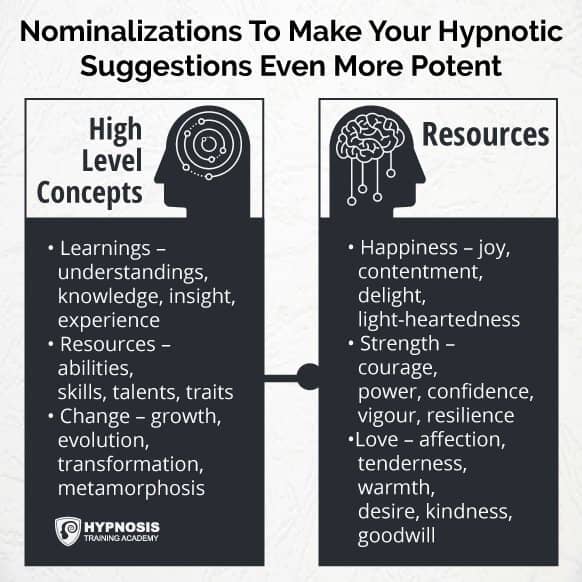 >>Want to discover everything master hypnotist Igor Ledochowski knows about hypnotic suggestions as well as 21 additional advanced hypnosis techniques? Check out this invaluable collection of Advanced Hypnosis Masterclasses – they’ll answer every question you ever have when you get “stuck” doing hypnosis.

As discussed in Part 1, adjective are words that enhance the nouns; the qualifiers, distracters, and hyperboles that embellish the nominalizations, such as: amazing, awesome, powerful, exciting, etc.

In other words, they bring your language to life and create colorful descriptions in the minds of subjects and clients.

Here is a list of words that you might find useful when constructing a potent hypnotic suggestion: 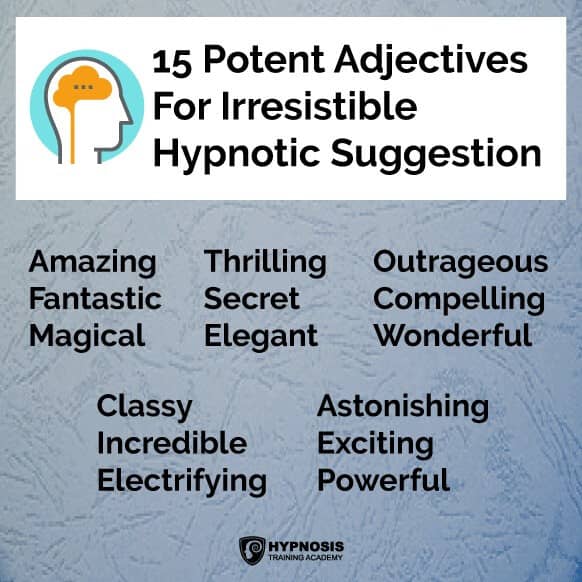 Trance themes, however, are words or groups of words that are trance-like in nature. Trance themes are used to help someone go into a trance. They’re a form of unconscious priming that creates an internal suggestion that trance is occurring.

When you use words such as: relax, focus, calm, comfort, drifting, safety or peace – over and over again in a conversation or induction – they naturally prime the person’s unconscious mind to follow these suggestions and feel a certain way.

Here’s an example of using hypnotic themes as part of a hypnotic induction:

“Every time you breathe, your body can feel so much more comfortable because you have felt comfortable before, which means that it is so easy for you to focus on my words when you know that relaxation and comfort are pleasant experiences.”

Did you spot the theme here? Yep, it was comfort and relaxation.

The above is a great example of the kind of language you might use when putting someone into a hypnotic trance. It puts the person in a calm state and primes their unconscious that good things are about to take place.

And here is a list of common trance themes you might want to use to complement your hypnotic suggestions: 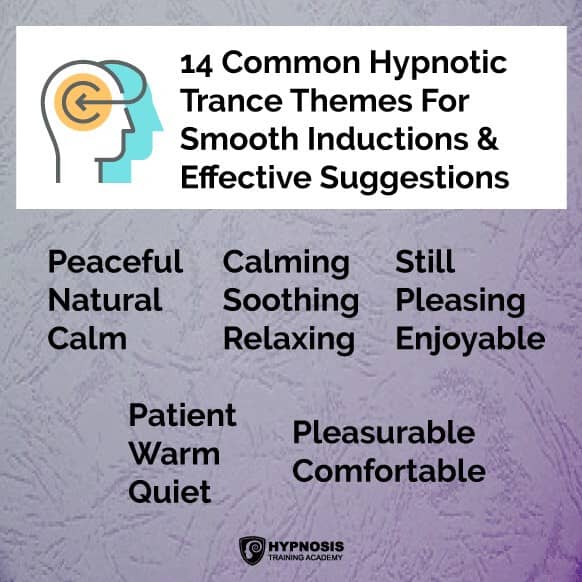 The Lack of Referential Index (LoRI) relates to the way you refer to someone or something. If you don’t specify who or what you are talking about, then you have a LoRI.

If you are not specifying anyone in particular, that is called a lack of referential index, or an LoRI. And if you then said “Relaxation can be enjoyed,” that turns it into a passive LoRI.

It’s passive because it uses a passive verb. But that’s a good thing, because passive verbs are more hypnotic. They force people to make sense of them at an unconscious level.

Creating a passive LoRI to use in your hypnotic suggestions is easy. Simply follow this formula:

X (nominalization) can be Yed (enjoyed)

Here are some sample Passive LoRI’s to show you how the formula works in practice:

How To Make Your Own Multi-Level Hypnotic Language List So Your Hypnotic Suggestions Pack A Powerful (Yet Non-Violent!) Punch

In Part 1, you may remember there being two tables showing lists of verbs, conjunctions, adverbs, action accelerators and language softeners.

Using these tables as a reference, now it’s your turn to create your “hypnotic language list” using what you have learned in part 1 and part 2 (this article), to include:

Creating lists like these is a great way to mentally “take note” of the kind of language you can use to make your hypnotic suggestions even more potent.

Plus, by having the list to hand, you can reference them whenever you want to prepare for a session with a client (and or have a few minutes to brush up on your hypnotic language).

For example, if you’ve been working with a client who is suffering from insomnia, you could reference your list in advance to see what kind of words would trigger the most favorable response.

So make a note to set a date with yourself and a pen, a notepad plus a thesaurus to create your list of hypnotic language!

Tip: You might want to use a large piece of paper to begin with so you can create multiple columns and have everything in the one place. That way it’s easier to see how it all fits together. If you have a whiteboard hanging up – even better!

Plus, as mentioned, it’s also really helpful to incorporate trance themes into your list(s). For instance: you could have a list of words for the following trance themes: relaxation, healing, letting go, comfort, safety, self-love etc.
You might also find it easier to have separate lists, such as one for verbs and conjunctions together, and a different one for adverbs and accelerators in another list etc.

Do what works best for you. The main thing is that your list(s) contains words that you’re comfortable with and they help accelerate your learning so you become fluent in the art of hypnotic language.

A great way to think of hypnotic suggestions is to imagine them as pebbles in a pond. Each one affects your subject’s unconscious mind in a different way.

Each word you use is in your suggestions is like a pebble. It stirs up a train of associations in the mind of your listener, associations that have been built up over a lifetime of experience. In the same way that the pebbles interact with each other, hypnotic suggestions also blend together to create new meanings.

That’s how it’s possible to generate multiple levels of meaning within what might otherwise seem to be a simple set of suggestions. But you don’t want to generate meanings willy-nilly – you want them to be specific to the hypnotic scenery or atmosphere you’re trying to create.

And that’s where unconscious priming can be so useful. 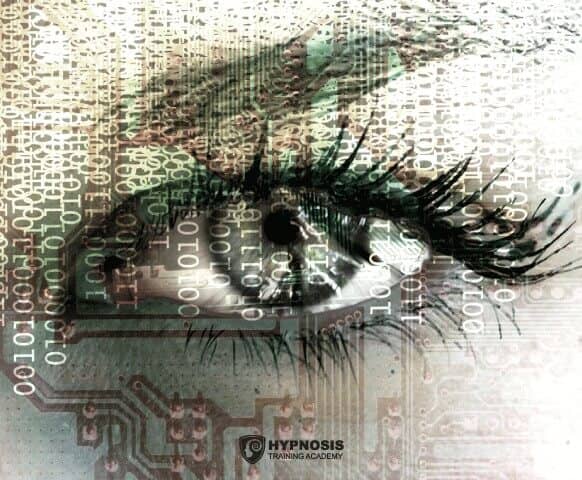 It’s a technique that allows you to prepare someone’s mind to respond in a certain way. It’s like playing with a loaded dice, so the outcome is always going to be in your favor.

Unconscious priming is a psychological phenomenon that has been demonstrated over and over again. Here are a few examples of the studies and results that show the phenomenon at work.

The trick with unconscious priming is to develop a list of words that are all associated with the hypnotic scenery or atmosphere you want someone to find themselves in.

These words prime the unconscious mind so they’re already expecting whatever it is you’re going to say or elicit from them.

In the old age example above, people’s minds were primed with the idea that old age made them slower and less agile, for example. And even though the words were buried in sentences where their meaning was disguised, they still managed to penetrate the unconscious mind and produce the desired behavior.

So there’s no reason why you can’t use unconscious priming to do the same thing with more positive outcomes. Here are the steps you need to take to be able to do that.

If you find it difficult coming up with lots of words to associate, try using a thesaurus. There you’ll find lists of synonyms for just about every word you can think of.

Feel free to experiment and you’ll find that there are lots of different ways to use the same material.

Also remember that the point of the exercise is not to collect a bunch of words together. It’s to help you prime the unconscious of the other person so that they become even more susceptible to your hypnotic suggestions.

In other words, it should help to make your hypnotic suggestions even more irresistible.

>>Want to discover how you can make your hypnotic suggestions even more irresistible, as well as other “insider techniques” such as hypnosis profiling, how to exploit pseudo logic and hypnotic power loops? Check out Igor’s invaluable collection of Advanced Hypnosis Masterclasses to discover these and much more.