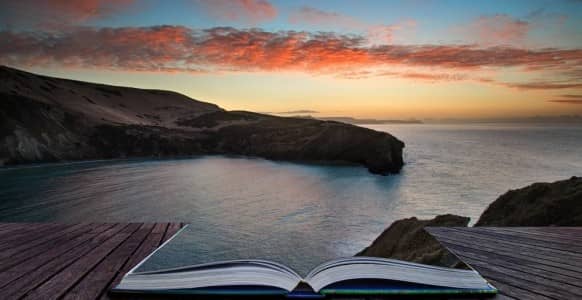 In the Bible, Jesus relates the parable of the farmer sowing seeds. The seeds get dropped into 4 kinds of soil:

Naturally, the seed that fell on the good soil prospered. This represents the person who hears the word of God and truly understands it.

Jesus told 46 parables in all. And for a good reason too…

They make us listen. They hold our attention. We want to hear what happened. We need to know how things turned out, whether good triumphed over evil, and if the bad guys got their just desserts.

I don’t share this example to preach christianity. But because the Bible is great storyteller… and also as it happens to be the most read book in the world.

Make no mistake – stories are able to achieve something in the easiest possible way that hypnotists everywhere strive to accomplish:

They bypass the critical conscious mind and weave their way into the unconscious.

How do they do that?

Stories transport you to other times and place. They fill your minds with rich imagery that helps you conjure up magical or mysterious destinations.

Going back to the example of the Bible, if it had simply said, “Listen to the word and understand it,” it might not have captured the attention of its listeners. Telling parables, however, meant it was able to get past any resistance readers might have and stimulate their imaginations.

The Different Kinds Of Stories

“After nourishment, shelter and companionship, stories are the thing we need most in the world.” – Philip Pullman, author of the trilogy His Dark Materials

As well as parables, stories can be told in the form of:

An anecdote is a story based on something that happened to you or someone you know. It’s a real life story that could be amusing or informative, or both, depending on the content.

Allegory is an example of an extended metaphor. The most famous allegory is probably Plato’s “Allegory of the Cave,” a story about coming out of the darkness (or ignorance) and embracing the light (or knowledge).

When the word “fables” is mentioned, more often than not, it’s Aesop that springs to mind. He wrote or told lots of them, using simple or humble stories to point out universal truths. Generally speaking, fables are moral tales that were originally used to help people make sense of the world and their place in it.

Jokes are a bit of a double-edged sword. Tell one funny joke and you can make people laugh. Tell jokes all the time and they won’t be able to take you seriously. A good joke works best when it’s part of another type of story, perhaps an anecdote or a fable where the joke comes at the end.

A metaphor is a comparison between two things that seem to have nothing in common. By comparing them, however, you create layers of meaning and bring something new to both. Here’s how Shakespeare did that very thing in one of his better-known metaphors:

“All the world’s a stage,

And all the men and women merely players;

They have their exits and their entrances,

And one man in his time plays many parts,

His acts being seven ages.”

And, of course, parables are also types of metaphors.

As mentioned above, stories sneak into the unconscious mind. They do this in a number of different ways:

A good story can be hypnotic. It can suck you into the plot and dazzle your mind. It can fill your head with the sights, sounds and sensations of any person or place in the past, present or future.

Some of the very best stories are actually stories within stories. One of the most famous examples of this is the tale of “Scheherazade and the Thousand and One Nights.”

Scheherazade tells the king a different story every night, stopping at daybreak before the story is completed. The king is so eager to find out what happens that he spares her life for one thousand days. She starts a new story every night, keeping the king on the edge of his throne, until ultimately he falls in love with her and makes her his queen.

This is, of course, fiction… but it serves as a powerful reminder of just how enthralling a great story can be.

How to Improve Your Storytelling Skills The late and great Milton Erickson was a great storyteller.

From the hypnotist’s point of view, telling stories is one of the easiest ways to make people relax. A good story immediately shuts down the conscious critical mind and stimulates the imagination.

Renowned hypnotist Milton Erickson is famous for using stories to get around a person’s resistance to hypnosis. Erickson was a master at storytelling, but he didn’t simply make up stories on the spot. Instead, he used any information he could get his hands on, information that was relevant to the person seeking help.

That could be information about:

Erickson had a knack for weaving stories around topics he knew the patient had an interest in. Before the person knew what was happening, Erickson would have brought him or her into a trance state. But to anyone else listening, it might sound like a load of nonsense.

Erickson knew that if he could get the patient engaged in the story, he could add words of power and subtle suggestions. It might sound like he was just babbling away, when in fact he was using the story as a vehicle to motivate, inspire, and help the patient make significant changes.

So how can you get better at telling stories?

The simple answer is: practice. Before you meet a client, rehearse what you’re going to say. Make notes about the points you want to cover and practice telling your story out loud. Whether you ever use this particular story in the actual conversation isn’t important, it will get your unconscious mind to start developing specific stories.

Another way to get better at storytelling is simply to read lots of stories. Good stories are everywhere. There are millions of books to choose from on any subject that grabs your attention. The more stories you read, the easier you’ll find it to create your own stories.

Discover the 7 different types of hypnotic storytelling to influence people in almost any context with the Master Hypnotic Storyteller training guide.

So the final question is, what makes a story a story?

The Elements of a Story

In its simplest form, a story has 4 basic parts:

In any story, there has to be action. Someone has to do something or go somewhere. It could be driving a car, walking in the woods, or climbing a mountain.

The mountain climber, for example, wants to reach the summit. To be able to say he did it. To get the satisfaction that comes from achieving a goal.

Next, this action needs to be interrupted. The person climbing a mountain may be startled by a large bird of prey, eager to protect its young from any and all intruders.

The interruption can affect the climber in a number of ways. He might decide to give up and go back down the mountain. He might choose to go on and risk upsetting the parent bird, knowing he’ll have to suffer the consequences. Or he might take the opportunity to photograph the bird before descending again.

When he reaches the bottom of the mountain, he reports the sighting of the bird of prey. Others are alerted that there’s a nest at the top, and although he didn’t reach it, his climb did have a positive outcome.

He gave the bird and its family the chance to survive, undisturbed. He achieved a different goal than the one he set out to achieve, but was still able to enjoy a tremendous feeling of satisfaction.

Is there a moral to the story? You could say there is. When you aim for a specific goal, you might not always accomplish it. But chances are you’ll accomplish other goals along the way. And simply by striving to achieve that specific goal, you will have taken some action to change your life for the better.

That’s the power of a good story. It can take you anywhere you want to go. It can illustrate points in a way that makes them entertaining and easily digestible. It can shatter your defenses so you’re able to relax and open your mind to new possibilities.

And once you can do that, there’s no limit to what you might achieve.